We finally sold the TV just a few days before we sold the house.  A 60-inch Vizio Smart HDTV.  That was the last big item among what remained of our possessions.  For a while, we considered taking it with us when we went to store our stuff at Bonnie’s parents in PA.  We were getting ready to leave the USA and travel the world.

On the day before we drove up to her parents’ house in PA, we decided that we would sell the TV.  We did not need such a big one really.  At two years old, the TV still had some value in it that we could get a good price for.  That was about three weeks before the closing of our home sale.  Since then I had listed it on craigslist and OfferUp and only received low-ball offers.  Four days before the closing we still had the TV.

We’d have had to move that TV.  Not the worst thing, we would have put it in my parents living room to use. But the chances of selling it at a good price later would diminish, and we’d be faced with the risk of damaging it during transport.

So I decided to do what we’ve been calling a “lot sale.”  Put together items that do not sell individually and sell them as a lot.  Here’s an example of one that I put together: 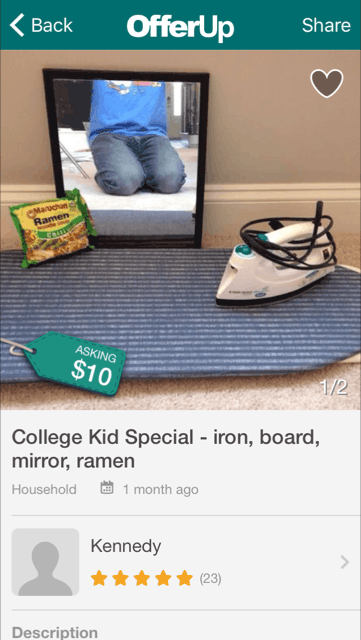 I still do not understand why that one did not sell.  lol

For the TV lot, I included a JVC 5.1 digital receiver, five speakers, a subwoofer, and a Panasonic 5-Disc Carousel DVD Player.  These other items were not selling or selling for way too cheap in other ads.  I hooked them all up in our dining room, which had been serving as our showroom for the last four months.  Well, really, the entire first floor of the house has been our showroom.  Every time somebody came to buy an item, we told them to go shopping in the house.  It worked really well.

With the entire ensemble all connected and set up, it was showtime.  All I needed then was a movie that had scenes where things are flying all around, in order to accentuate the surround sound experience of “being there.”  I did not have any DVDs.  The few that I collected had all been sold.  Our Amazon Prime account had been terminated, and so was the Netflix account a year earlier. 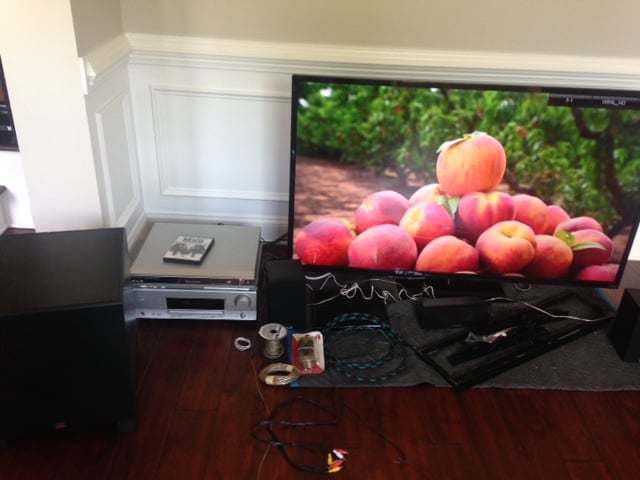 I listed it up on craigslist first.  I figured I would wait until Friday to list it in OfferUp to catch all the weekend shoppers.  The ad was titled “60-inch Smart HDTV with Home Theater Package.”  There, I thought, that should catch some attention.  I just needed to acquire a DVD before anybody came to check it out.

A day went by and no responses from craigslist.

Men in Black help us with the sale

With nothing to show on the TV I borrowed a DVD from a friend.  I picked out Men In Black 2.  I figured there ought to be some things flying around in that movie, aliens perhaps.  Will Smith should be able to sell my TV.

Friday afternoon came, I whipped out the old iPhone, and listed the TV in OfferUp.  In the two prior weekends, we’ve had crazy activity on OfferUp.  Lots of responses to our ads.  I fully expected to have some responses to the ad that weekend as well.

By the time I got home on Friday evening, the excitement had turned to dismay.  Not one response. None for the TV, and only one or two for our other ads.  “I don’t know what’s going on,” I told Bonnie over dinner which consisted of Rice-a-Roni and some microwaved sausage links.  Odd food combination, yes.  I used to love Rice-a-Roni.  I stocked up packs of it a few years ago and then lost interest. It was what’s for dinner because we had to eat up everything in the pantry so we didn’t have to take those with us when we moved, a mere four days away.

We also had to eat all the food in the freezer.  Thus the sausage links.  It was our protein for that evening.  There was a bag of it, the last few things left in the freezer.  We used to have a huge box of hot dogs that we had bought from Sam’s Club.  Had to eat that too.  It took us more than a month.  Feel free to take a minute to digest that.

“I did sell the body-board,” I told Bonnie.  We’ve had that one listed for a while on OfferUp.  A lady who worked at the local Advanced Auto Parts wanted to buy it.  I went there to do the sale and also to dump all the used oil that I had collected while doing the oil changes for our cars.  The lady told me that her family was heading out to the beach for the long weekend.

That was just it, we realized.  Everybody’s going to the beach for Memorial Day weekend.  Nobody’s paying attention to craigslist or OfferUp.

Resigned to lugging the TV with us when we move, I went back to packing up the garage which was turning out to be quite a chore.  There were some tools and accumulated construction materials that we have to use to renovate the new property.

At about 7:30 PM the doorbell rang, and I opened it up to see a Hispanic couple standing there. I recognized the guy.  He had been at the house last week to buy some kitchen stuff.  I remember because he was taciturn but I kept talking to him in Spanish which I have been fervently trying to learn.  Apparently, his wife has been looking at the other items that we had listed on OfferUp and they have come to pick up a few more things. I talked to them a bit, asked them about their plans for the long holiday weekend.  He gave me a confused look, and then he told me that he had to work during the holiday.  He told me he works in construction.

It did not even occur to me to try to sell them the TV, but I noticed the guy eyeing the TV set up in our showroom.  I told them that it was for sale, and thought nothing of it.  They did not turn away, or say the usual things like I’ll think about it and let you know, or I’ll talk to the wife (well, she was right there).  Instead, they kept looking at it, and so I fired it up and played MIB 2, skipping over to the part where Agent J accosted the gigantic subway worm alien.  Lots of things flying around in that movie scene.  Including Agent J.  And still, the couple kept looking at the set, conferred with each other, and then kept looking.

Seiscientos, he offered. I paused, for no real reason but for effect – I, the wretched salesman, and this, the fleeting thought that almost made me laugh out loud. He wanted to buy it for $50 less than my asking price.  Which brought it down to exactly how much I wanted for the set.  I told him yes, that they were going home with this TV!  Well…

They had a Toyota Corolla and there was no way to fit that TV in that car.  So I offered them our limited time only (limited to that very moment, to be exact)  Memorial Day weekend free delivery special.

With the help of our neighbor, Melissa – she was hanging out with Bonnie in the kitchen, enjoying some fine Muscadine – we boxed up the TV and shoved it in our Subaru Outback which was in “Truck mode” – rear seats were taken out for maximum cargo space – and I followed the couple up along 401 to a storage facility in Garner.

They had a storage unit.  It was filled with very nice household items – among others, a leather sectional sofa, a floor standing lamp with mosaic shade, tall bar stools, wall art, an oil painting that they had purchased from us a week earlier.  In talking to them, I found out that they were not very happy with the apartment where they currently lived but they still had three months on the lease.  So they rented out this storage unit, either due to lack of space, or lack of security in their current apartment.

They have been filling up this storage unit with very nice things in anticipation of their move to the new apartment.  I felt so excited and happy for them.  Yet the irony could not be denied.  They were acquiring things for which they had no space, and we were getting rid of stuff and we had all the space in the house.

And so it went.  This was how we finally sold the last big item among our remaining belongings. We’ve had to sell a sectional sofa, a 2-person sauna, a huge L-shaped office desk, a treadmill, and a gym system.  What remained could fit in small moving boxes for easy transport.  This transaction came at just the right time.  Because from then on, we concentrated on packing everything else up in earnest.  Pack out, close on the sale of the house on Tuesday, and then close on the purchase of the new property on the same day.  Perfect.  Or so I thought.  I wish I could say that things worked out perfectly during our move.  I wish I could say that everything fell into place.  But that’s a story for another post.