From Midland Texas where we visited my cousins Kevin and Michelle we still had another 10 hours on the road before arriving at Trin’s brother’s house in Phoenix. We decided to break it up with a tour of Carlsbad Caverns National Park in New Mexico and a stop by my old stomping grounds in El Paso Texas.

Carlsbad Caverns has the fifth largest chamber in North America.  It was pouring rain when we got there and the elevator that transports visitors down to the cave was out of service.  We had to hike through the natural entrance which made for a more interesting experience. 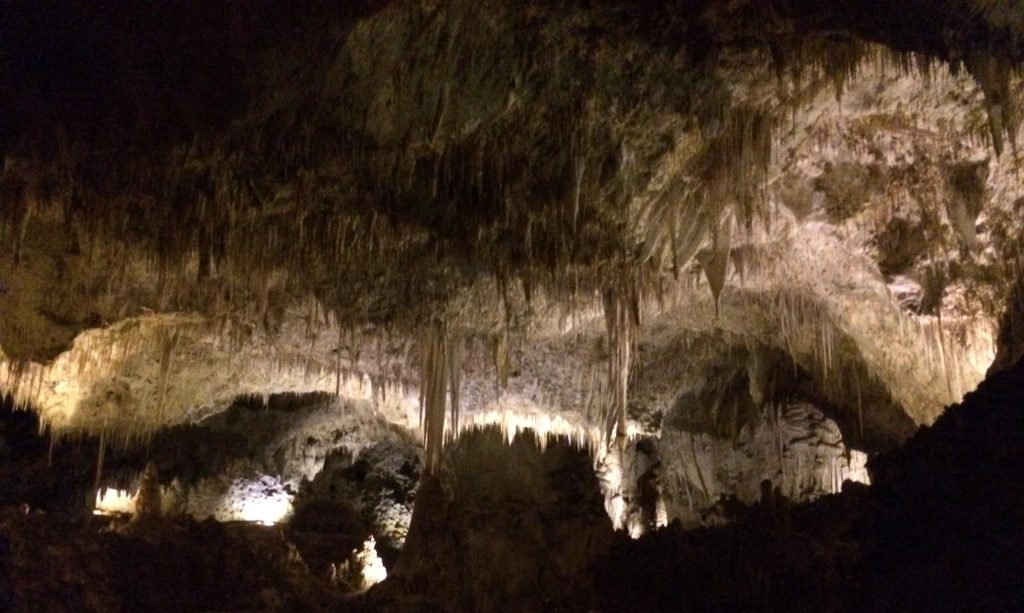 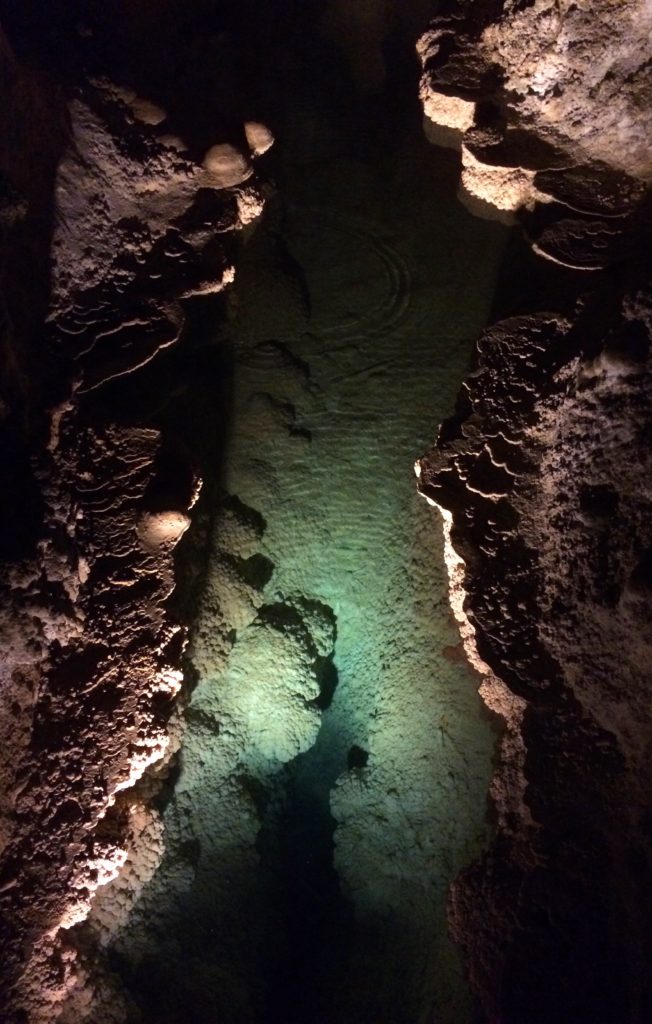 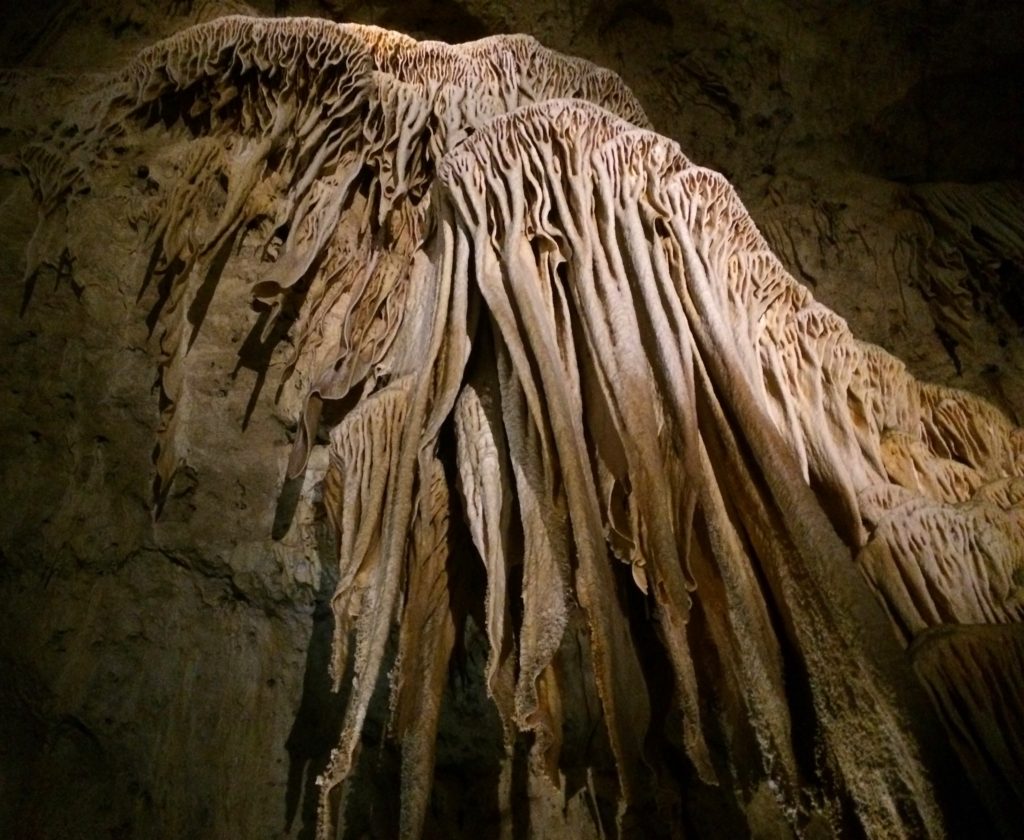 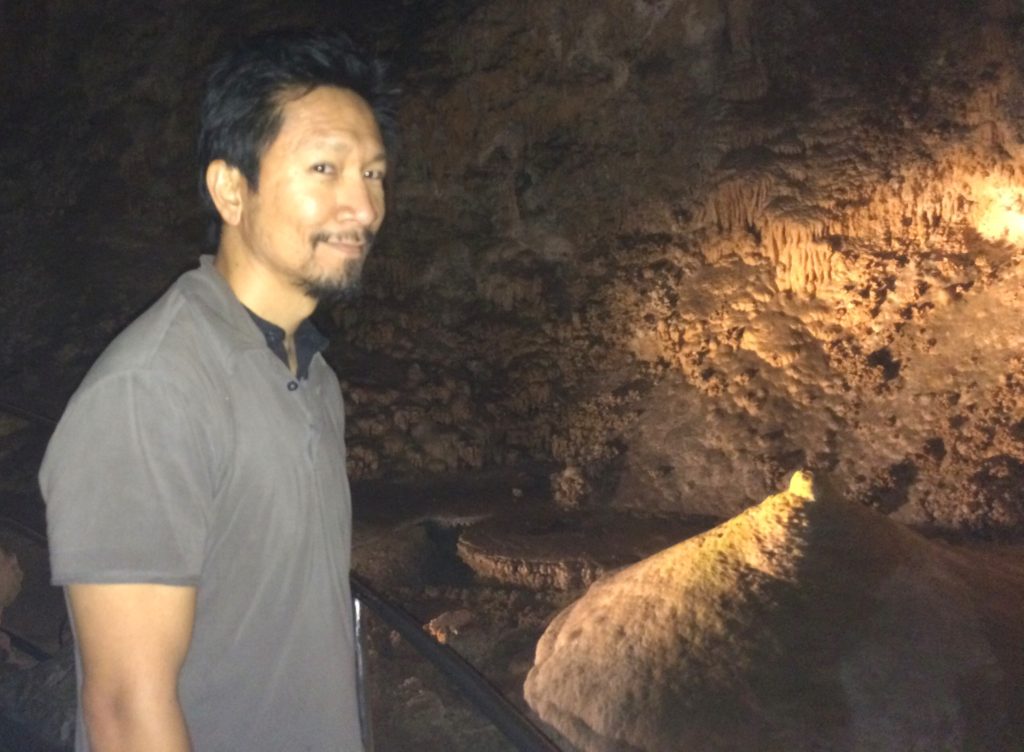 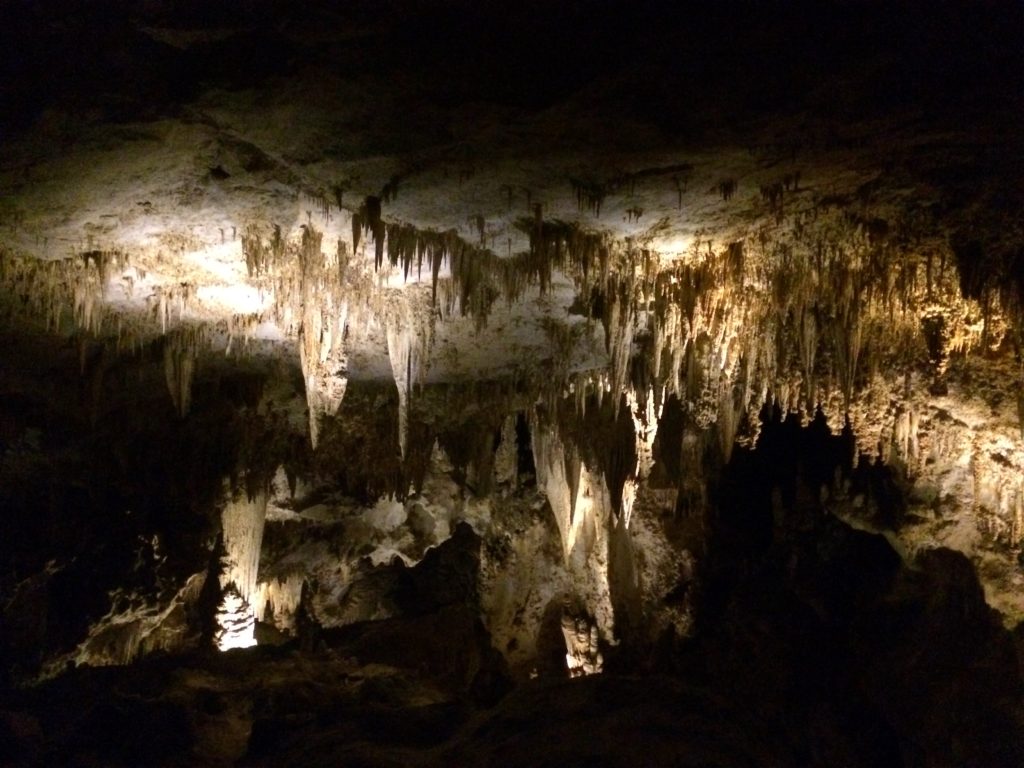 At dusk, you can watch the bats fly out of the cave, but we did not stay for that.  We moved on to find lodging in the next town.  We camped at the base of Guadalupe Mountain. This mountain range rises starkly from a plateau and ends abruptly with a tall mountain.

In the morning we had to make a detour to Dell City, TX to get gas.  It was a 26-mile round-trip detour.  It was the closest gas station from where we were.

We drove to El Paso, TX where I lived between the ages of 3 to 8. This is also where Kevin and Michelle lived with us for a couple years.

We drove by the old house on Sapphire street. There is now a fence around the yard and cement where there used to be grass. Grass that needed to be watered twice a day and would die if we stepped on it.  We had a Cocker Spaniel named Beaver.  When he was just a pup, he ran into the scalding waters of a hot spring and from then was always deathly afraid of water.  But he was a great dog.

As I was checking out the house I saw a man in the side yard. I decided to introduce myself and ask to see the backyard.  It would be cool to see if the fruit tree we planted there many years ago had survived or least finally produced fruit. I told him I had lived there when I was a child and asked to check out the backyard. He readily agreed.

The House of my Childhood

Turns out he is the one who purchased the house from us in 1982 and has been living there ever since. I mentioned how he built in the patio in the back along with a few other things he had changed. He warmed up to us and gave us a tour of the entire house along with the story of how each of his kids and grandkids were doing. We had a great visit. The house was much smaller than I remembered and I could not imagine having 8 kids in those two tiny rooms.

Next was a quick stop three miles down the road to the school and church we attended.  The same pastor was there. He asked about the whole family and let me know that Danny, one of the guys my dad taught in his youth group, was going to become the next pastor there.

Next to the church is a development full of houses where there used to be a dry desert.  My sister and I used to play there a lot.  We saw our share of dust devils, and we would jump into the center of the dust devil and try to move with it.  Inevitably it would change directions and we’d be sandblasted.

One time, we chased after criminals in the desert.

We had pulled into the church one night to find some guys breaking into the cars in the parking lot. As soon as the headlights washed over the robbers, they fled.  Dad floored the accelerator and the engine of The Beast roared loudly.  Tina dove to the floor of the back seat to hide while I propped myself up between the two front seats to see it all, my tiny little 7-year-old fingers gripping the seat covers, fighting against the sudden acceleration.

Dad opened the car door to knock the first one down on our way out of the lot.  I felt a mild thud as the door slammed against the back of the man and he hit the ground.  In his classic drill instructor voice, Dad commanded the teens standing there watching to grab and hold the man down.

Off we went almost on two wheels around the corner after the other two. We sped toward the gate and into the desert, dust flying all around us. When we were close enough to the fleeing would-be thieves, Dad skidded to a halt and jumped out almost before the car stopped. He ran after the thieves and tackled one of them.  The man was almost able to make it over the wall into the next neighborhood.

Dad threw him onto the hood of our car and looked up to see our friend Pappy.  Pappy, a local cop who attended the church, rushed towards the commotion to help out.  Dad stepped aside and Pappy roughed up the thief.  Pappy said later that those thugs usually get off with not much consequence, and this was the time that they will get their comeuppance.

That made for an exciting night.  Now on towards Phoenix.

3 thoughts on “Trip Through Texas And New Mexico”