Legend tells a tale of two brothers and the woman they loved in Cartago.  She chose and married one.  In anger, the thwarted brother killed his sibling.  In remorse for his sin, he built a cathedral for Cartago.

A year later it was destroyed by an earthquake.  Numerous attempts have been made to rebuild, but earthquakes continue to destroy it.  During the last attempt, another earthquake in 1910 halted the construction and it remains unfinished today.

As Trin and I walked up to the gate of these beautiful ruins we walked past a couple making out against one of its walls.  I commented quietly to Trin that I might not want to make out in the ruins of thwarted love. 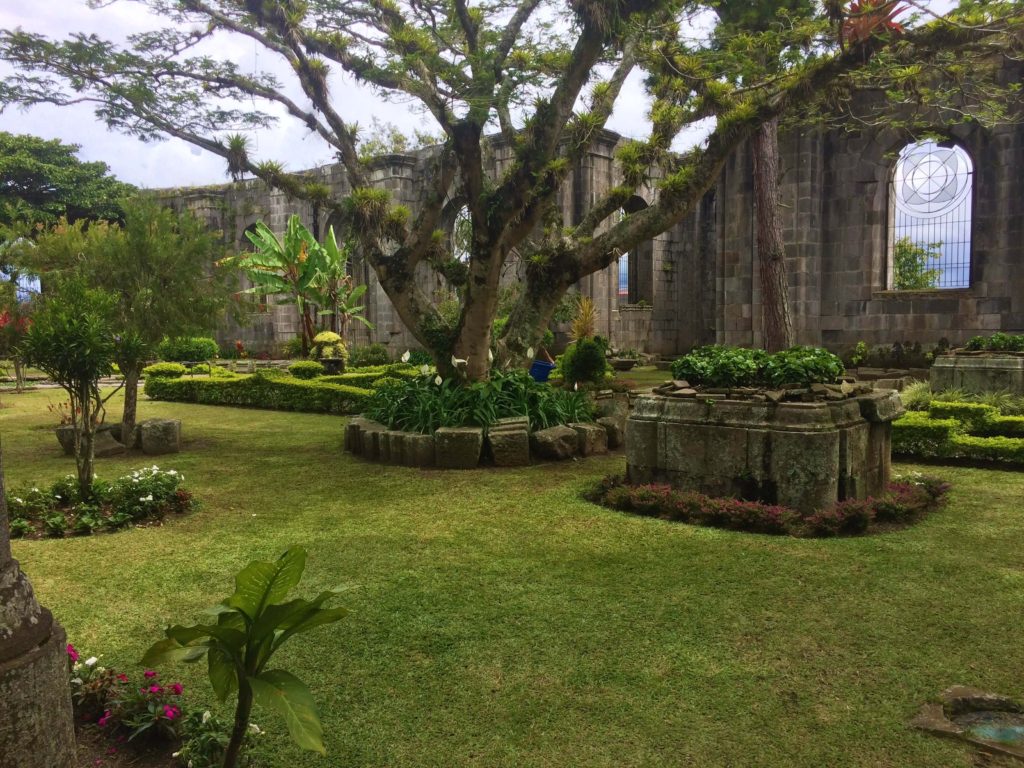 It is a quiet town unspoiled by too much tourism, but with interesting attractions.  The Santiago Apostol Parish ruins near the town’s central park is just one of the attractions.

THE JAIL OF CARTAGO

Not far down the road is an old jailhouse turned into an art and music center.  The front rooms are filled with art and the large wall outside the cells is covered with a large mural depicting the colonization of Costa Rica. 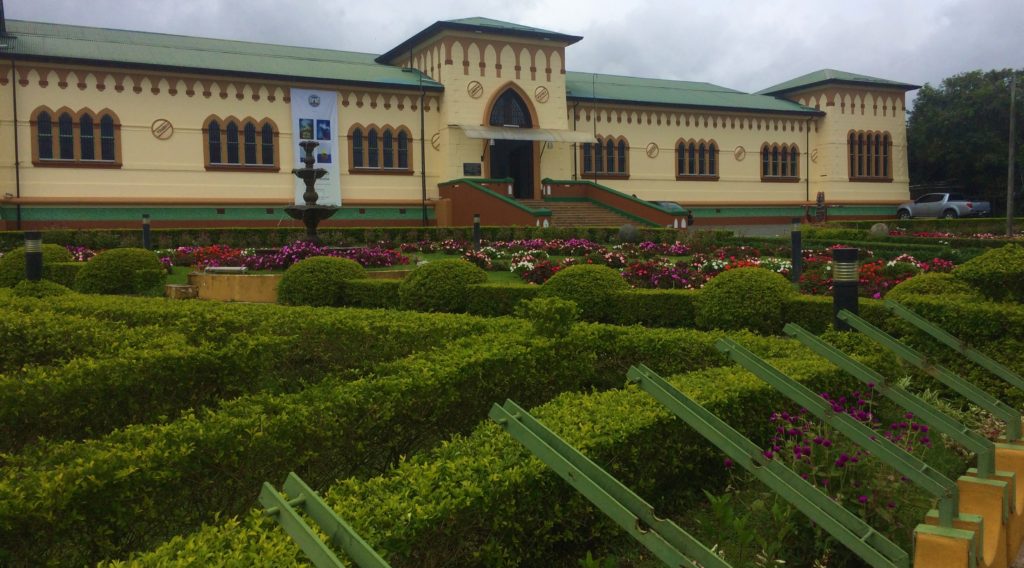 The jail cells on the first floor contain additional art.  In the second floor, each cell has been turned into a practice room for music students.  The small cells are just large enough for a couple of chairs or a small electronic piano. The cell walls were soundproof, making this a perfect transformation to what it is today. 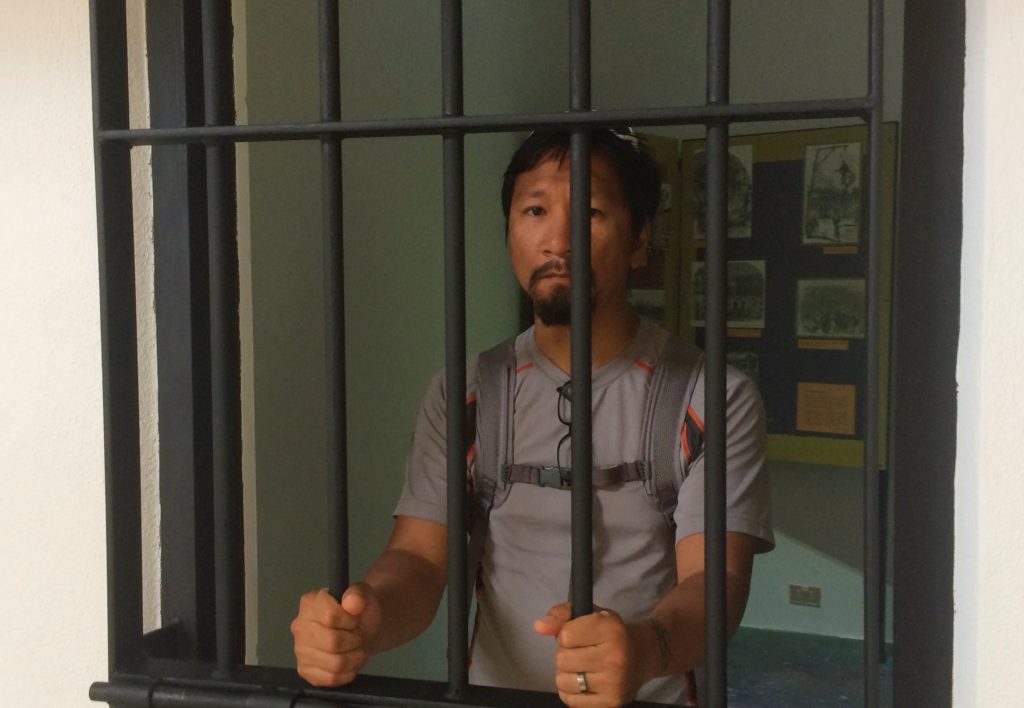 The basilica is another major attraction in town. As we entered the sanctuary a silence descended.  The only movement was a few women crawling down the center aisle making their way to the altar at the front.  I have to wonder: is this fear, reverence, or love.  Maybe a mix of all, but the overwhelming feeling that I get from this environment is the fear of those worshiping here.

FEAR OR LOVE IN CHRISTIANITY

For me, this seems to be the differences between the two sects of Christianity. Just as an example, Catholicism (insert most religions here) rules by fear and guilt and the compelling need to earn heaven by our own volition.  Yet some of the nicest and most trustworthy people I know are Catholic. 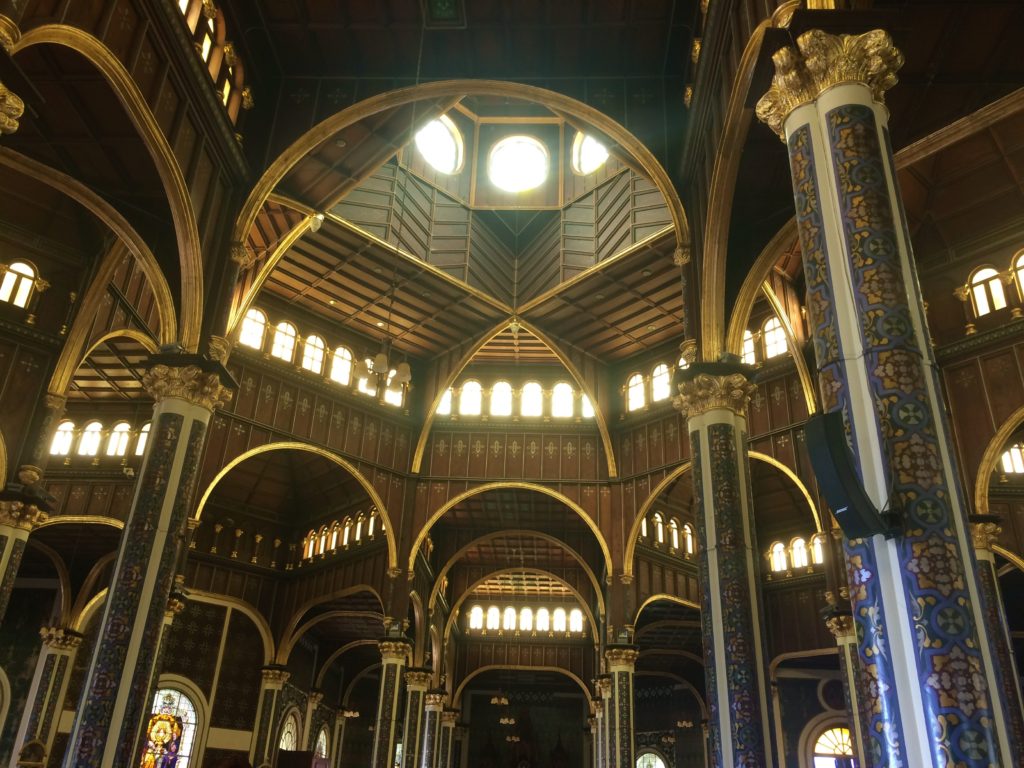 The basis of Protestant teaching is love (or supposed to be, even though many churches today have wandered off from this first love).  Jesus paid the penalty for us if we just accept the gift of eternal life and we are to be good out of love for Him. That is the purpose of the grace He has shown us.

Yet to date I have had a number of negative experiences with them.  Maybe much of this is due to the fact that most Protestant churches no longer focus on the two ultimate commandments (love God, love thy neighbor).  Maybe I expect too much, but it is a quandary.

I still hold to love, maybe I’m too much of a romantic.