Read about our first week in the refugio here.

The Spanish word Solté means let go.  In this refuge, you can let go of everything, including the sense of fashion as Trin did.  He has his shorts and shirt on inside out.  He is spray-painting the dining room chairs black with an air compressor. 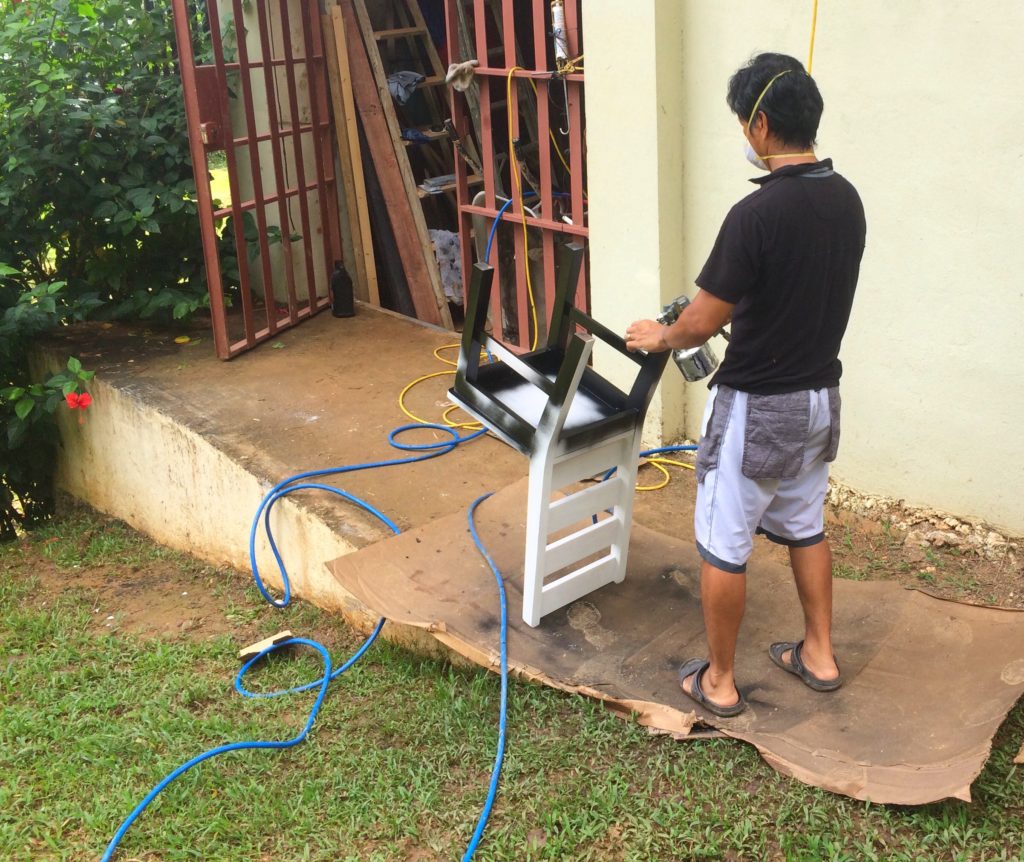 He’s been dodging raindrops to try and get some of the 40 plus chairs painted black. The previous day I just finished priming most of them with white KILZ primer.

The lounge chairs are done along with the end tables and bunk beds. We are just waiting on a final can of varnish to finish the plywood bottoms of each bed. 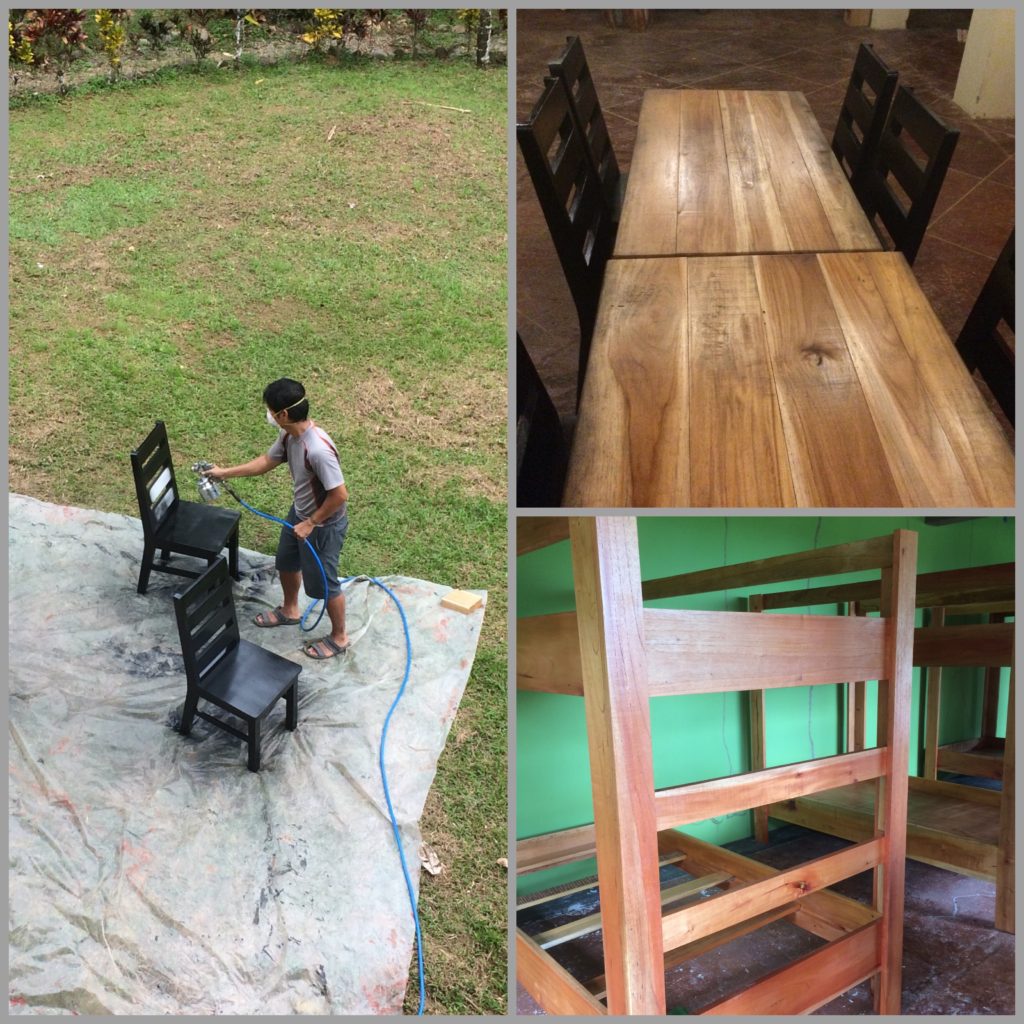 One day, while Trin was sanding the bunk bed and I was varnishing after him, Wim came walking by with a couple bags of groceries. I was surprised to see him as I didn’t hear the jeep (and it can definitely be heard clearly in this solitude!). He said that his jeep didn’t make it up the hill and he wanted to know if we could help pull him out with the Land Cruiser which we have come to call the tank.

Trin was more than happy to help. We drove partway down the mountain to a very steep and slick part of the mud and gravel road. We attached a tow cable to the frames of both vehicles. Trin backed up the hill with the tank and pulled Wim’s jeep out and up the hill. Trin got to drive the tank up the rest of the steep slopes leading to the refuge. He had a blast. 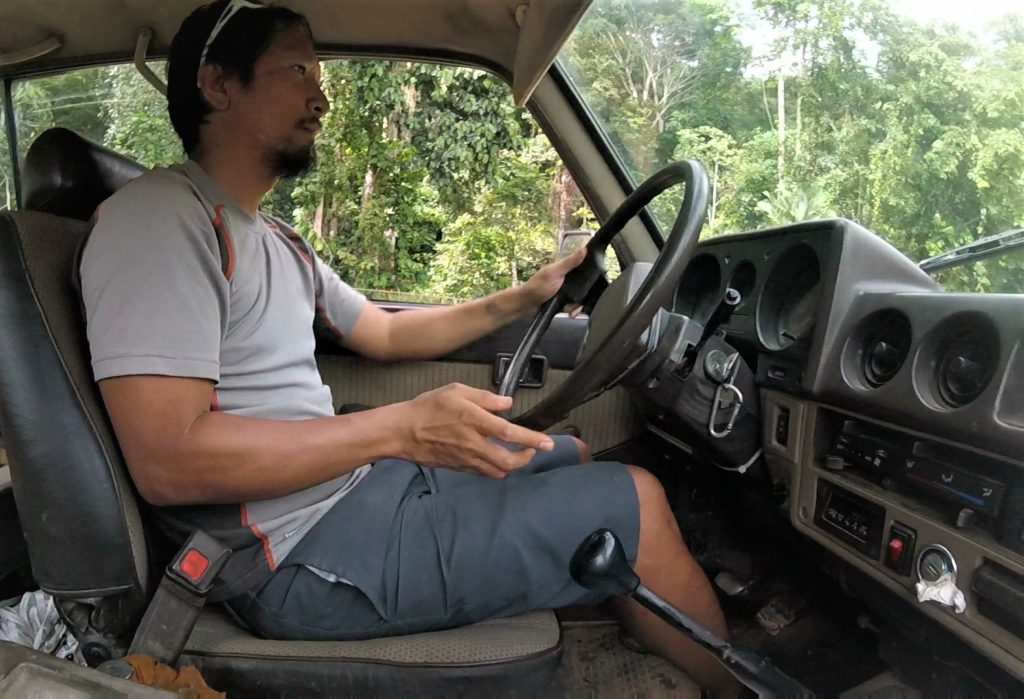 On Friday morning we took advantage of the sunny day and the opportunity to catch a ride into town and spent the day in Playa Uvita. We walked to the beach and out onto the whale’s tail-shaped section.  On the narrow part of the tail, there are waves coming at you from both sides.

We swam and enjoyed the sunshine.  It was a hot day and the beach sand was also hot to the feet. The water was warm but refreshing. I floated in the surf for a while just enjoying a bit of a cool down in the water. 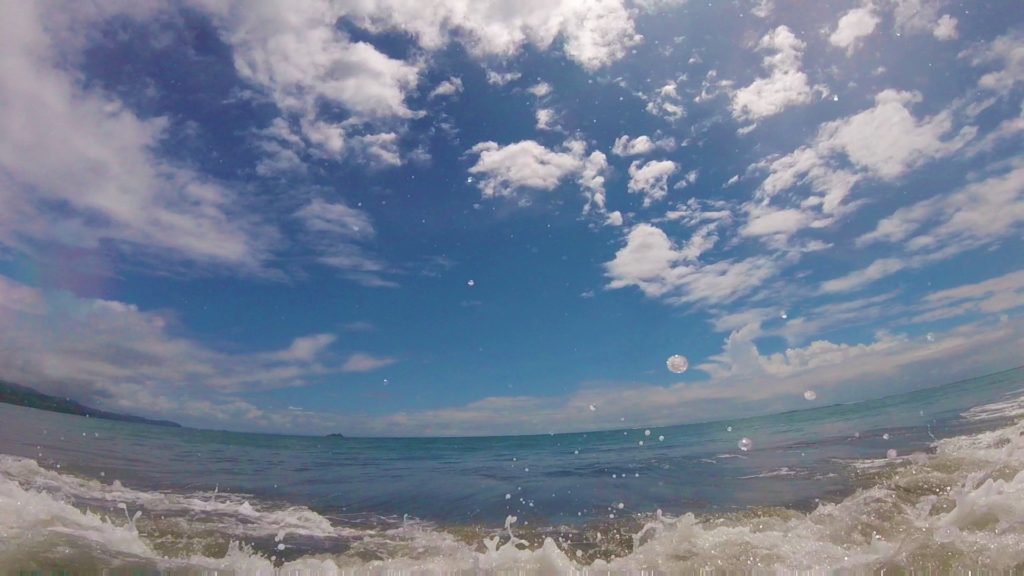 When it was time to go back, we decided to hike up the mountain back to Refugio, just for kicks. It’s an anaerobic cardio workout straight up the mountain. Partway up the dirt road, we hitchhiked in a passing Honda CRV for about half a mile, until we had to disembark to take a turnoff for the steeper part of the road.

We were racing against the onset of nighttime at this point.  The sun had gone from the horizon with only its fast-fading reflection against the darkening sky illuminating our path.  We had a flashlight but at that moment it was sitting uselessly on the bedside table. With still about 2 kilometers to go in the thick woods, we quickened our pace even more.  We started to feel raindrops against our skin.  We turned a corner, looked up and, impossibly, there stood Wim. 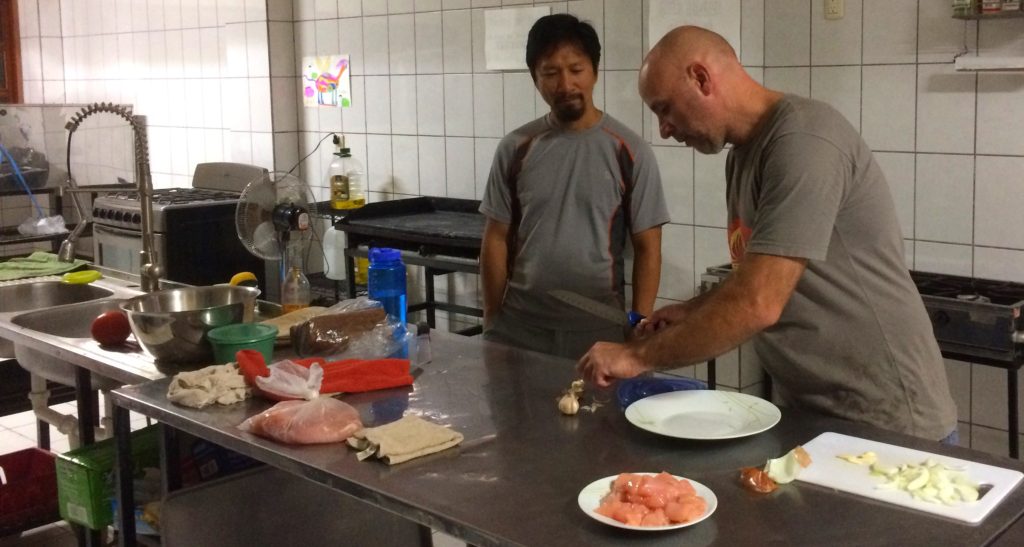 He had just dropped off the Tico who mowed the lawn that day (with a Weed Wacker).  The guy wrecked his dirt bike on the way up the mountain and couldn’t get all the way to Refugio so Wim picked him up with the tank.  Later that day Wim dropped him off where he left his bike.  Just on a whim (ha!), Wim decided to walk just a bit of a way down to see if we might be close.  And that’s how we ended up having a ride for the steepest part of the trail. By the time we arrived at Refugio rain was pouring. We had an awesome day but were so glad to be home and it truly feels like home here.

Later during our stay, we got to interact with Marianne, Wim’s wife.  She was bedridden for a few days due to an operation.  She was affable, funny, and prone to quick outbursts of laughter whenever she talked.

We also got to know the two interns, Rachel and Saralyn.  Rachel is taking a gap year after high school and was volunteering as a nanny to the director’s children via a Christian nanny organization.  Next year she will be going to New Zealand for a Christian mission camp.

Saralyn has been with the Refugio for almost a year.  She knows her way in the kitchen and also made use of a lot of the indigenous fruits and herbs growing around Refugio, like lemons, limes, lemongrass and cilantro (she makes an excellent Gallo pinto).  She talked about setting up a food truck when she returns to the United States.  Both Saralyn and Rachel were a pleasure to meet and get to know a bit.  Very sweet strong girls.

There’s a lot of wildlife that hangs out near Refugio.  Throughout the days we would hear the loud howler monkeys and got to see them up close as well.  There were also a variety of Toucans that would fly from tree to tree around the Refuge.

There’s a coati that roams around the place.  Coatis belong to the raccoon family.  They could get aggressive if you feed them and they demand more.

Whenever we walked between buildings at night, we carried a machete just in case.

This has been an enjoyable first experience with WorkAway.  Refugio Solté is truly a special place.

2 thoughts on “Refugio Solte: In the Jungle”