We were warned that the monkeys would steal our lunch here in Manuel Antonio Park.  Turns out the coatis and racoons are just as persistent and made out with not a few sandwiches.

Manuel Antonio is nestled on the Pacific coast of Costa Rica.  You can take a direct bus to the park from San Jose.  Since we were coming from Uvita in the South we stopped in Quepos first.  Quepos is a great little town to get an inexpensive meal and only a 20-min beautiful bus ride from the Park.  We stayed at the Oasis Hostel.  The entrance to Manual Antonio is just around the corner, a two-minute walk, if that.  Playa Espadilla is just a five-minute walk.

We arrived at the hostel late in the afternoon and then we went to the beach right away to take a dip and watch the sunset.

The following day we walked to the ticketing booth for the Park.  We were warned that many people along the way would try to sell fake tickets to the park so we ignored most of the solicitors along the way to the official ticketing office.

We spent the entire day wandering through the trails of the park.  This is one of the most popular parks in Costa Rica and it is widely covered in travel blogs.  Our favorite things about the park were:

We enjoyed watching and filming the white-faced capuchin monkeys.  They were not aggressive nor did they shy away from people, but they do sometimes throw things, and one of them startled Trin as he ran by.

For the most part, they just went about their business of finding and eating their food.  They would look at us but it barely registers in their faces or actions. 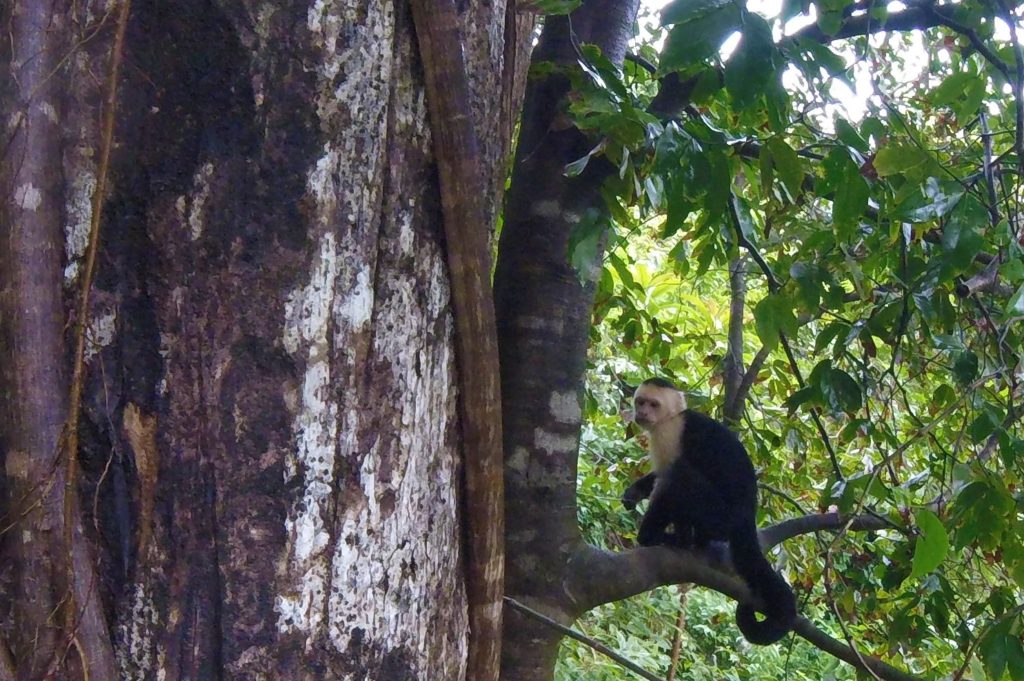 There’s a wonderful network of trails going through the jungle and leading to spectacular viewpoints.  Many of the trails are paved and well-maintained.  These are short easy hikes that are worth doing.  The park no longer hands out maps to the patrons.  The trails are well marked and there are maps at all the trail intersections. 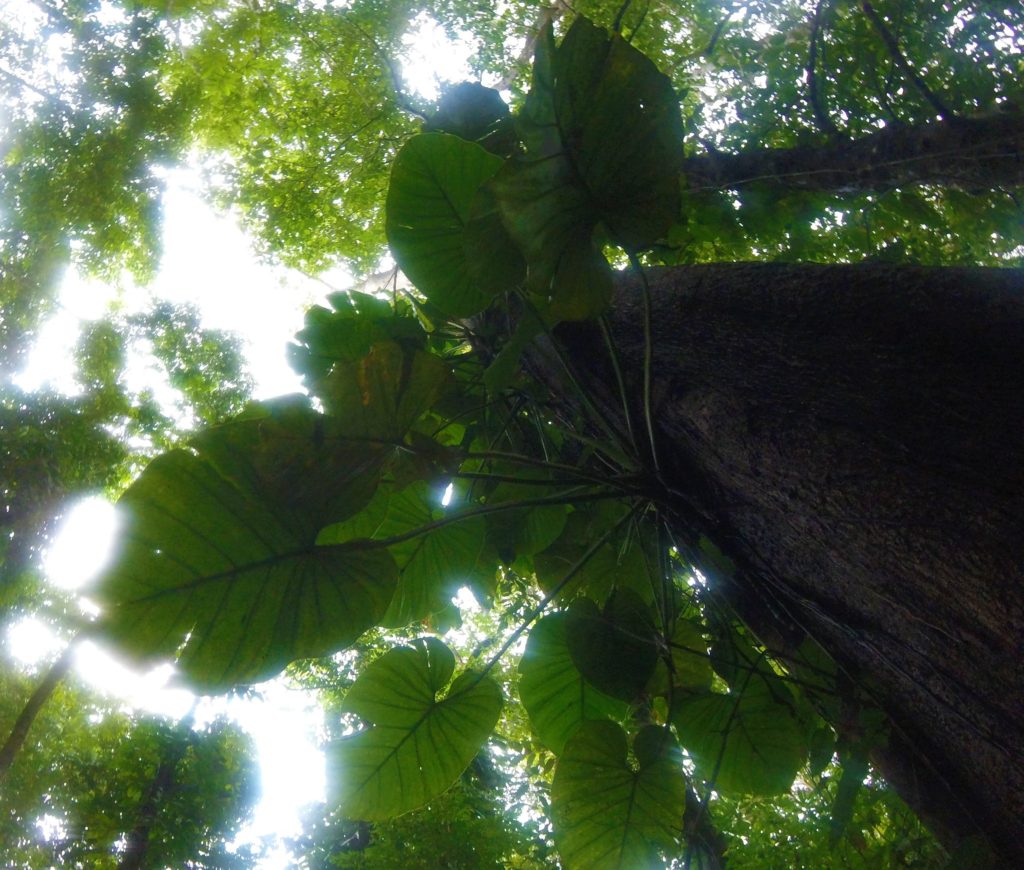 The day started with a grey overcast and turned into a sunny afternoon.  We got clear and unobstructed views of jagged coastlines and the tiny islands surrounding the park. 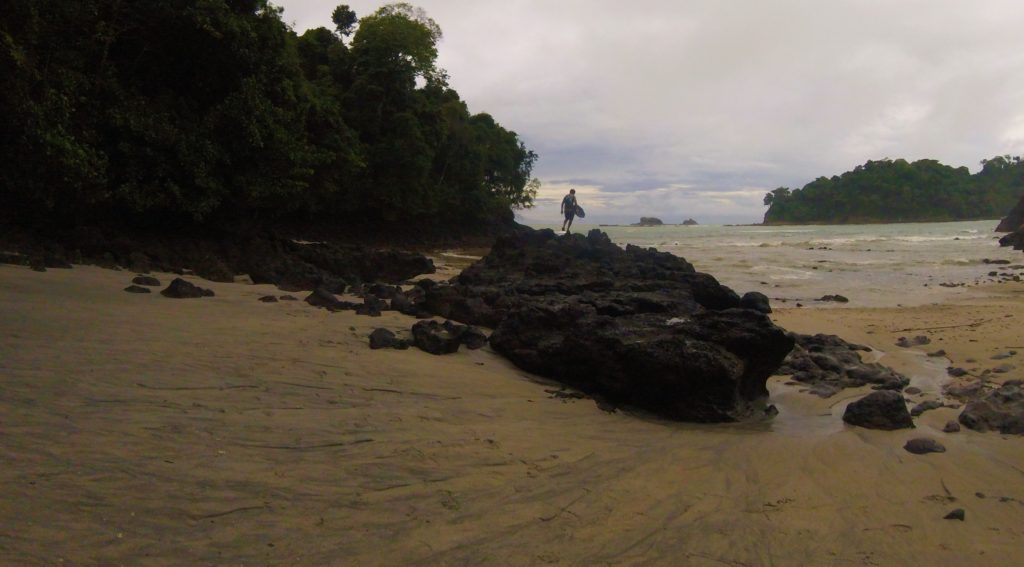 NOT QUITE AN IDYLLIC BEACH

You think monkeys are mischievous, just wait till you meet the coati and the raccoons at Playa Manuel Antonio.  I think they have their alarms set for lunchtime then gangs of them come out and terrorize the park patrons.  They will steal any food within reach. They will paw through any unattended bag like they were TSA agents.  One raccoon was so bold he came right up to me and put his claws on my thigh and tried to stick his nose into my lunch.  Poking them with a stick did not deter.

A girl near us got scared of this tactic and threw her lunch away.  The raccoon happily retrieved the sandwich and ran away, joined by his cohorts.  We used Trin’s crocs to swat them away.  A woman behind us tried to swat them with her hand and got bit. 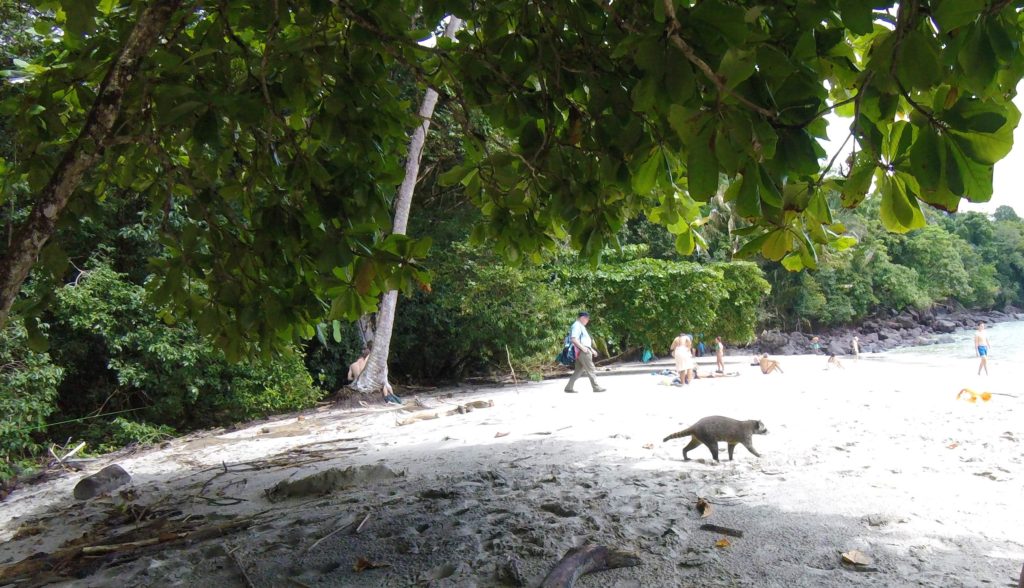 One party of about five were all in the water and they had to rush back to the beach when the raccoons started ransacking their picnic spot.  A guy (he looks like Calvin’s dad, Trin said to me) picked up a handful of sand and flung it at the raccoons and that worked pretty well.

A coati was repeatedly pestering one guy in particular.  He must have some really good food in his bag.

There was a group of guys drinking Imperial (apparently the national beer) openly.  A park ranger approached and reminded them that alcohol was not allowed.  After the ranger left, the group continued to drink.  The ranger came back with another ranger this time, and they confiscated the beer.

Smoking is prohibited.  A couple of people were asked to put out their cigarettes and they complied.

We ended the day with another dip in the ocean. 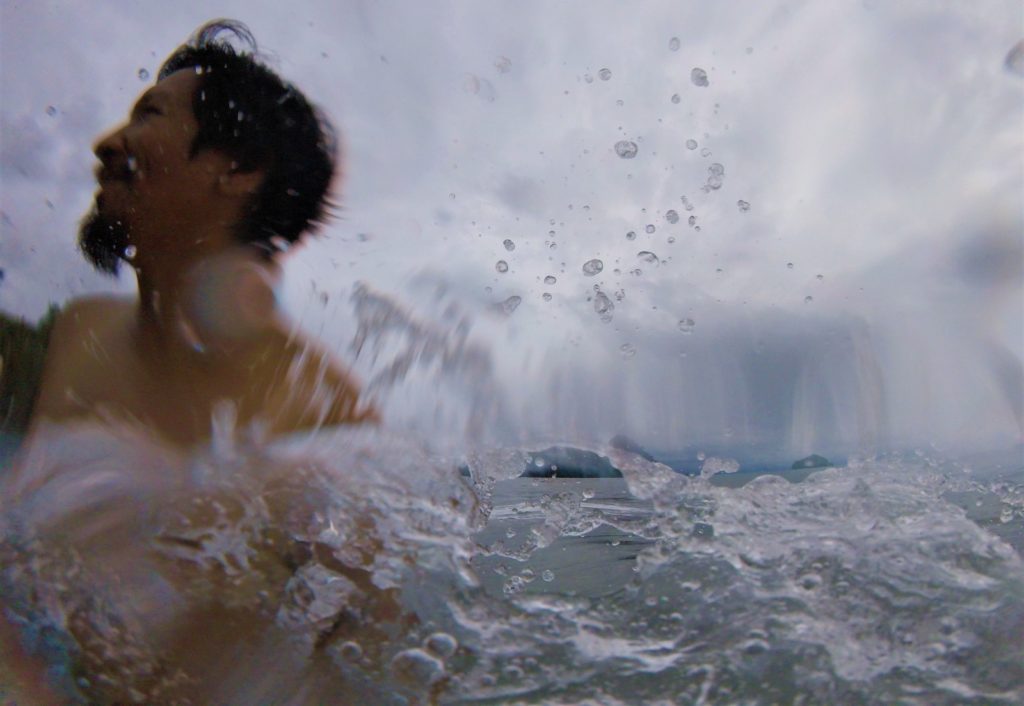