Some say he is crazy, others say he is wise.  He is a hermit known as the “rock man” and we were going to make a trek into the jungle to meet him.

We navigated the busy bus terminal of Leon, located north of the town in a densely packed market.  The street was filled with vendors selling all kinds of products from shoes to padlocks, fish and food, and rocking chairs.  Still, with all the people walking around on the street already filled with motorcycles and bicycle taxis, cars manage to drive through it, but very slowly.

Finally arriving at the terminal, we ducked into an alley to enter the bus area.  A local man told us in Spanish to always remember Leon and to come back soon.  We agreed.  Memories of the burning viejo, gigantonas, and even a bloody day would stay with us a long time. We found a home here in Leon with Manuel and Romy but it was time to move on.

We took a minibus to Esteli followed by a chicken bus to the small town of Somoto.  This journey took us up to the northern highlands of Nicaragua where the air is cool and towns are surrounded by mountains, where men have their shoes polished at a street corner, and the internet cafes have lost a large part of their clientele to the free wifi in the central park where the younger generation hang out, their faces illuminated by their phones in the cold evenings.

For the first time in months, we pull out our jackets from the bottom of our backpacks. 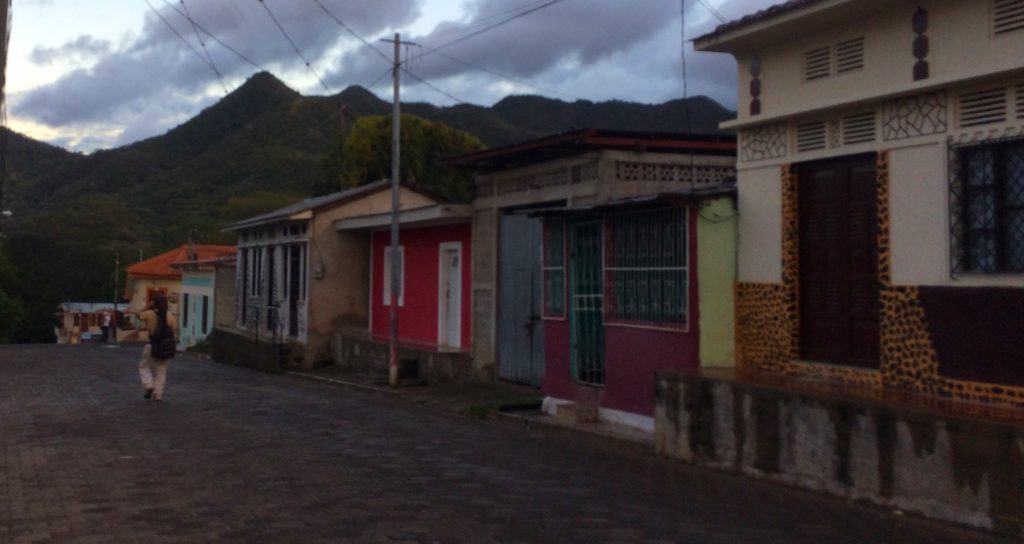 Early the next morning we took a chicken bus toward the Honduras border and alighted at the bridge over Rio Tapacali at La Playa.  We would be doing a self-guided trek of Somoto Canyon, passing up on the $35-per-person guided tour.  Thanks to the Travel Pixelz blog.

We climbed over the railing and made our way down to the water following it for a while as the cliffs beside us began to close in. 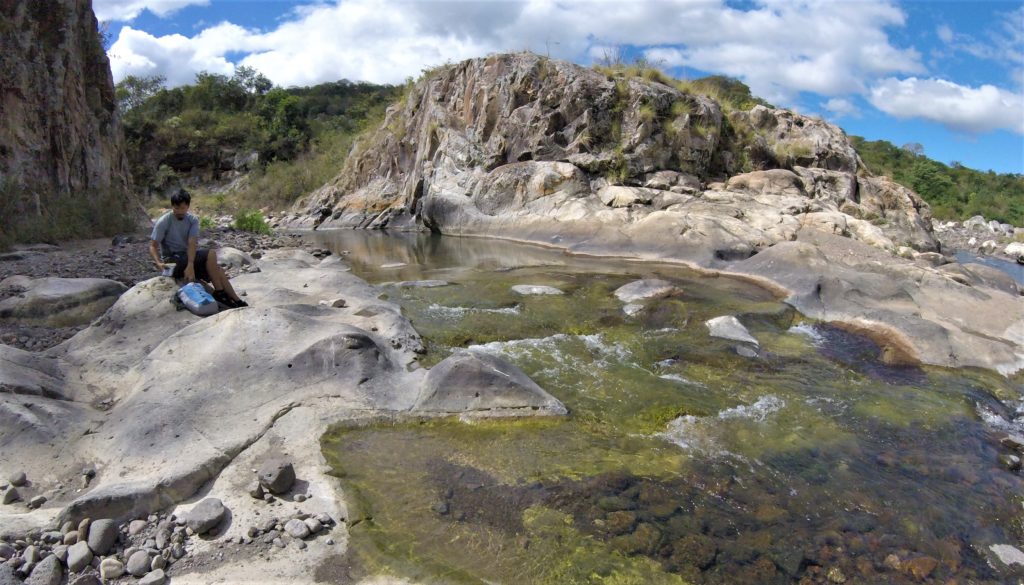 We crossed the river many times to follow a small path that crisscrossed back and forth wherever there was a ledge to walk on.  Horses and cows grazed by the river bank.  At some point, the ledge disappeared altogether and the river was flanked by a cliff on each side.  Swimming through the middle was the only option to get to the next section of the trail. 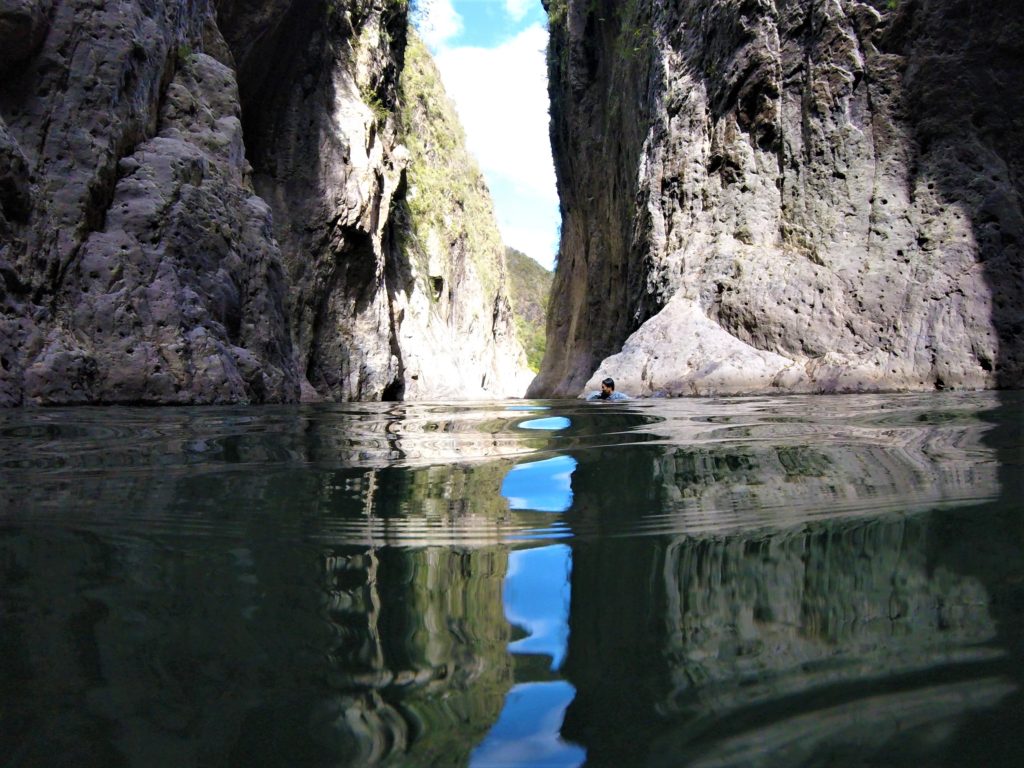 We reached a section where a boulder blocked the path completely and we had to climb up and jump into the water on the other side.

There was a lot of swimming from this point onwards, and some dramatic vertical cliffs.

At the other end of the canyon, we walked towards the Panamerican highway and caught a chicken bus back to the town of Somoto.  Back in the hotel, there was no water and we found out that the power had been out for most of the day.

It was a nationwide power outage.

We walked through the dark streets to buy some drinking water at Pali.  The owner of the hotel used to live in New Jersey and he was friendly and helpful.  He had a cute dog named Peluche, which means stuffed toy in Spanish.

The following morning, we boarded the chicken bus headed back to Esteli where we would take a bus south out of town to begin a trek into the jungle looking for the rock man.

THE HERMIT OF THE ROCKS

Alberto Gutiérrez is a hermit who left civilization almost 40 years ago and began carving stone in the side of the mountain in the jungle of Tisey.  We took an early morning bus to San Nicolas and got off at El Rancho then started walking towards El Jalacate.  The plan was to hitch rides for as much of the way as we could but there were no vehicles going that way. Instead, we hiked through a scenic mountain road and it was beautiful.

Eventfully, we reached the sign for El Jalacate and went down a path toward an open farmland down a hill through a couple of gates.  We found Alberto sitting by the stoop of his 10×5 ft shack tinkling with some wire and a rock.  He looked exactly as we’ve seen him in pictures, stark white mustache, eyebrows and afro-like hair.  His smile encompassed his face.  He kind of looks like what Wolverine’s dad would have looked like.

He waved us over and invited us to sit with him a bit.  We signed our names in his notebook.  He said he already has 17 notebooks filled with guest names.  We talked a bit then he showed us the path to his rock garden.  At first, we saw a few rocks with pictures carved into them among the garden of coffee plants and banana trees.

The path then began to ascend past pineapple bushes and out onto a ledge on the side of a mountain overlooking the valley.  To our right, the entire side of the stone mountain was carved into beautiful scenes.

Elephants and snakes and pictures depicting Nicaraguan history covered the surface.  I was in awe as we walked along the ledge and took in the expanse of his artwork.

Alberto is over 80 years old and lives off the land. He grows coffee, bananas, pineapple, and oranges.  The orange we were given was absolutely delicious as it had been ripened on the tree.  He joined us back in the garden and began to point out carvings and explain the meaning.  We caught most of what he was saying, but his passion for his work was inspiring.  He loves what he does and he loves his plants.

HITCHHIKING BACK TO ESTELI

After saying our goodbye we began our long trek back to Esteli.  After a couple of miles, we heard a lone vehicle headed our direction.  It was a truck so we stuck out our thumbs.  The driver pulled over and we climbed into the back.  We enjoyed the rest of the way back to Esteli with his cinnamon colored dog.

Alberto is not easy to find but the trek was beautiful and it was an awesome visit.  One of the highlights of my time here in Nicaragua.  It was totally worth the hike.

Skipping the guided canyon tour and doing the trek yourself.  Cost: 14 Cordobas roundtrip chicken bus fare from the town of Somoto, and some food and water.  You must be able to swim a few hundred feet at a stretch.  Or bring a life jacket or flotation device.