I sat squeezed into a truck bed equipped with tiny benches.  The vinyl roof was stretched over the roll bars, with the sides rolled up for airflow.  Our packs were strapped on top of the truck, something we generally don’t do. This time we felt comfortable with it since Trin would be standing on the open tailgate hanging onto the roll bars with four other people. 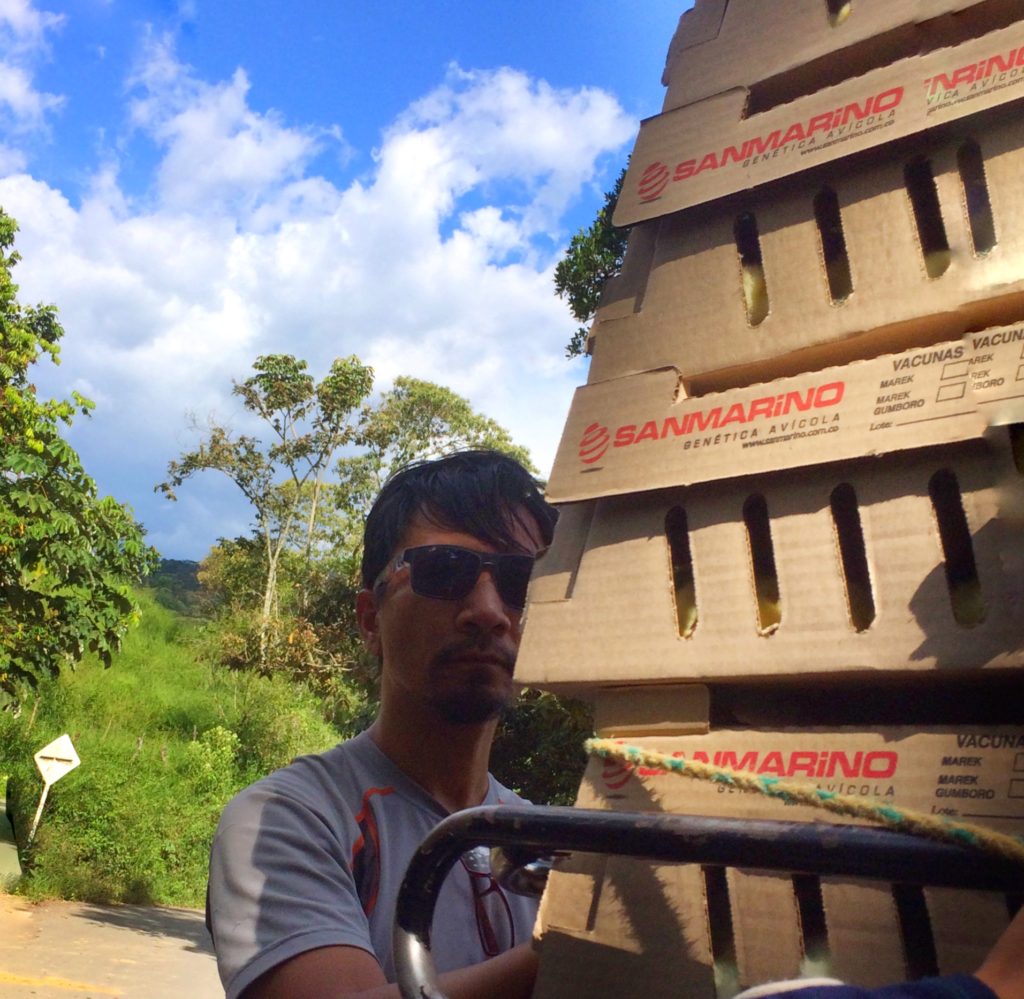 The truck bed was full and the remaining passengers simply hung onto the outside of the truck.

Among the luggage on top of the truck were stacks of what looked like huge pizza boxes that had holes on the sides.  The boxes were filled with baby chickens, and various yellow parts were sticking out of those holes, fuzzy yellow feathers, and beaks, and some heads with their tongues sticking out into the wind (no, not really).

They seemed all chilled out until we hit the dirt road, and then we heard a collective freaking out emanating from the boxes, subtle but unmistakable.

This was how we started the journey to Guadalupe, Colombia, a tiny little town in the Santander department, hoping to enjoy some naturally-formed jacuzzi pools.

The hour-long ride was mostly through dusty gravel roads.  The ride jolted us around as we craned our necks to get a view of the beautiful landscape on both sides.  In some places, bits of the road were gone, washed out by landslides. Our driver eased the truck through the mud on the remaining portion of the road.

Inside the truck, we began to talk to each other and got to know the strangers around us.  Almost everyone was from Colombia except me and two French girls named Améliane and Iloa, who were on an extended vacation before they start their medical internships.  They started much further down in South America and were headed North.  I’m glad our paths crossed because we would spending the next three days with them doing all kinds of crazy things and getting to know them better.

After arriving in Guadalupe we found lodging and quickly changed and headed out for La Gloria, a natural swimming pool a mere 20-minute walk outside of town.  A friend of the hostel owner showed us a shortcut and even walked with us part of the way there.  He was such a nice guy, giving us a lot of information about the town attractions.  He is a tour guide but he never tried to sell us any of his tours.

A dog joined us on our walk and it became our tour guide, basically showing us the way.  La Gloria is not quite as glorious as its name conjures but we jumped in anyway and it felt good after a long day of travel.  Just a couple of months ago a businessman on vacation tried to jump off from one of the rocks, slipped, hit his head, and died at the scene. We trod carefully.

We checked out El Salitre on the way back, still with the dog leading the way.  El Salitre gives a small preview of the Las Gachas and was an easy walk to reach.

GOTCHA IN A GACHA

Early the next morning the four of us hit the cobblestone trail that led us through fields, pastures, and gorgeous views of the mountains.  An hour of hiking took us to the Las Gachas of Guadalupe, Colombia, a river pocked with natural jacuzzis of varying sizes.  It appears to be a shallow river with only a few inches of water rushing over a flat stone but it is littered with deep holes.

The first two holes were so deep there is a warning sign.  If you go in you might not get back out.  What often appeared to only be a hole an arm’s length across could be shoulder deep, or even deeper.

We wandered up the river getting into a few of the jacuzzi pools, amazed at the depth and having fun with the unique landscape.

Another dog joined us again, guiding us on the path, waiting on the side as we dipped into the pools and played around in the water.

At one point the river pours itself down a hole, disappears under the rocks, and reemerges downstream, forming a tunnel underneath.

We slid down through the small cave and followed the tunnel to the other end.

Near the tunnel is the entrance to the path that goes to a cave. The gate has a posted sign showing the COP 1000 entrance fee. We walked through the gate and arrived at a small local farmer’s home.  They invited us in and led us through their house to the backyard where we were greeted by a parrot.

“Hola mi amor!” it said. It trilled the letter R much better than I ever could. We laughed, and the parrot laughed as well, which made us laugh all the more. It had other phrases in its repertoire but the laugh was the one that just kills it.

An old farmer guided us to the entrance to the cave. We proceeded to enter the cave while he waited at the entrance.  Within a few feet, it was dark as pitch.  We turned on our phone flashlights and proceeded over the rocks further into the darkness.  Trin was the first to squeeze through a small opening into the inner chamber.  I was next.  Just as I lifted my light to see up into the cave I screamed.  A bat had startled me by flying directly toward my face.  It made everyone pause.

“Um, what was that?” asked Améliane.  I told her it was just a bat. There were a number of them hanging upside down from the roof of the cave. 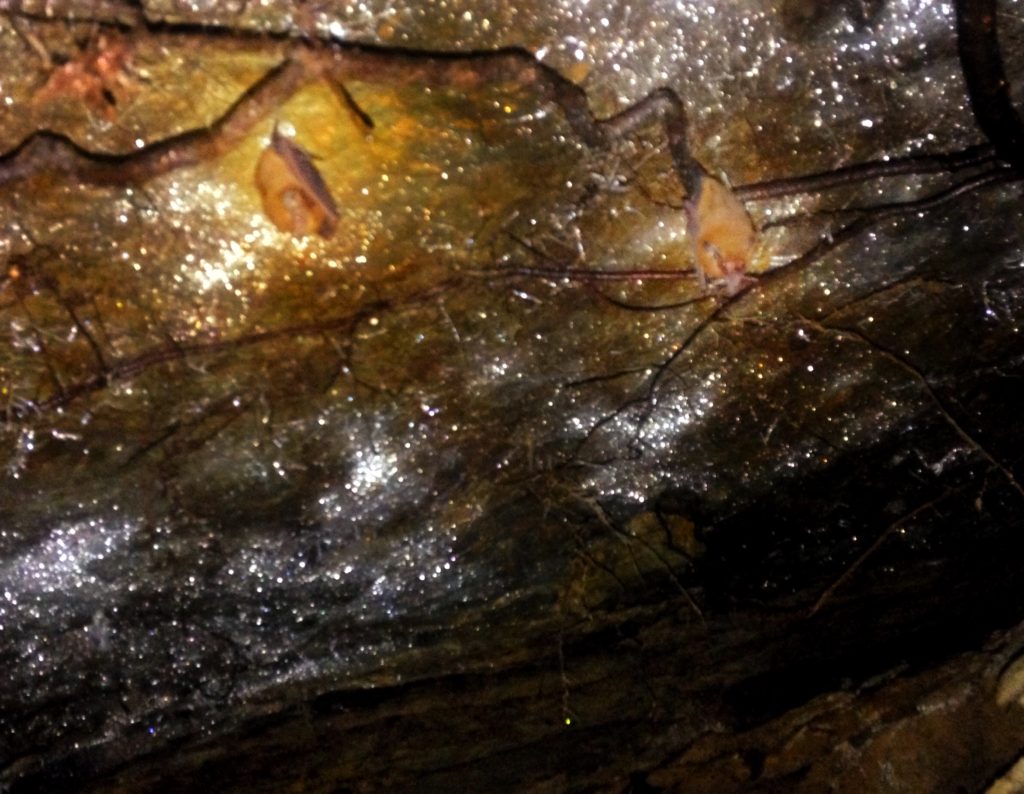 After we emerged from the cave the farmer motioned for us to go down another steep slope.  At the bottom was a large waterfall descending from about 40 feet above, the water disappearing into another cave.  We took some pictures and headed out.

Guadalupe was definitely a worthy trip.  The truck ride was fun, the hikes wandered through gorgeous terrain, the river unique and the caves were a fun side trip. 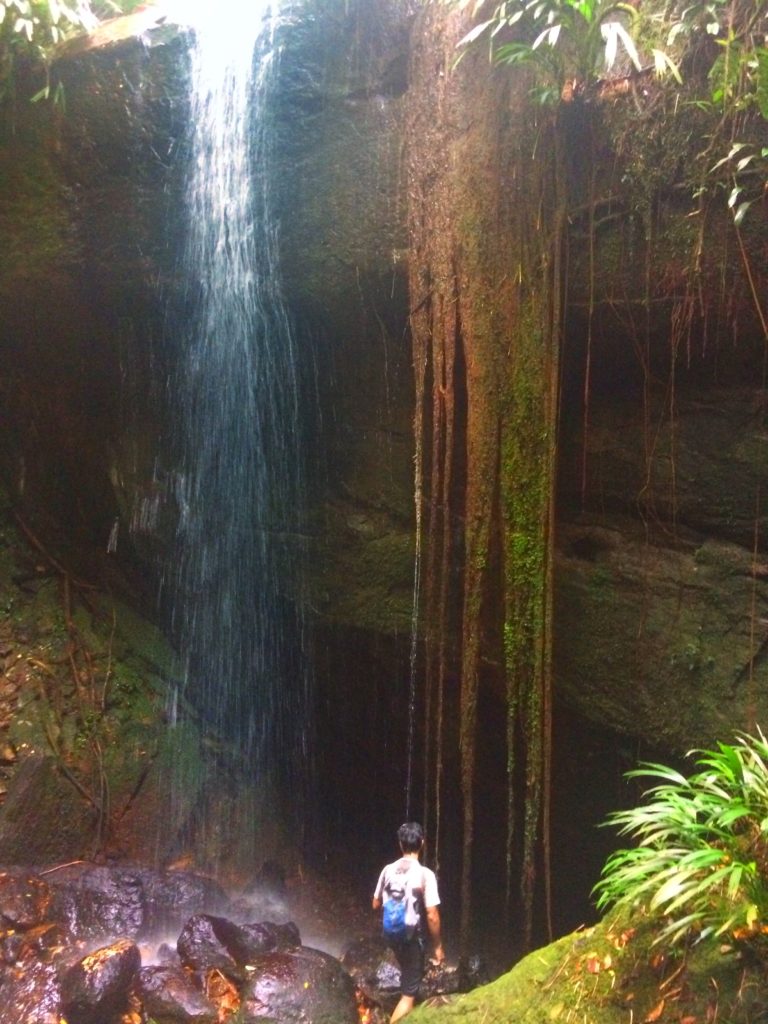