We had such a great time hanging out with Améliane and Iloa whom we met in Guadalupe.  We were delighted to find out that they were headed to San Gil which happens to be our next destination as well.

San Gil is a town known for adventure sports.  It was a nice place to walk around although some of the streets can be very steep.  It is primarily a place where you can set up headquarters for day trips to the surrounding area.

In San Gil, we took an hour bus ride to Barichara.  This town lays claim to being the most beautiful little town in Colombia.  I was skeptical but within just five minutes of walking around, it is easy to see that it just might be the most beautiful little town.  Its streets are more flagstone than cobblestone, built in a pretty mosaic pattern in which the pieces seem to fit perfectly against each other.  The town square is charming.

The town is small enough to just wander around, but there are maps in many of the attractions that can guide you to where to go next.  There is a paper factory, a couple of churches, and some historical attractions.

On the northwestern outskirts of town, there is an overlook of the entire valley where the Rio Suarez cuts through.  We stood there enjoying the view for a while before walking down the Camino Real, a historical trail that leads to the tiny little town of Guane.

The Camino Real trail provides great views of the surrounding fincas and countryside.  The walk takes about two hours.  It is absolutely beautiful but very hot on an early afternoon.  I wish I had an umbrella with me.  There is very little shade along the way.  When we did find some tree shade we would stop underneath in an attempt to cool down a bit.

By the time we got to the town, all our water was gone.  We stood in the first store we came to and gulped down a bottle of soda followed by a huge bottle of cold water.

Guane is composed of only about four blocks but it is quiet and very pretty.  Minimal traffic had us walking up and down in the middle of the cobblestone roads viewing the old homes and architecture.  The best view is behind the locked gate of the cemetery at the southwestern corner of town.

We stopped in the large stone cathedral facing central park since the interior was cooler and we could sit a bit.

Back in San Gil in the evening, we went to dinner with Ameliane and Iloa.  There are many good restaurants along Calle 12 north of the central park.  We discussed our plans for the following day. While we thought that the Chicamocha National Park was just too Disneyfied we did want to see the canyon itself.  We all agreed that running off a canyon cliff was a much better option.  We were going paragliding.

We signed up with Paravolar which has a tourist office right in the town square.  The lady there was so nice and she offered us Hormigas Culonas, roasted ants, a local delicacy.  We all took one on the palm of our hands, looking at it like it was an alien curiosity.  Even Ameliane, who swore she’d never eat one, was game.  These ants were huge.  We popped them into our mouths at the same time, counting ourselves out as if we were taking tequila shots. 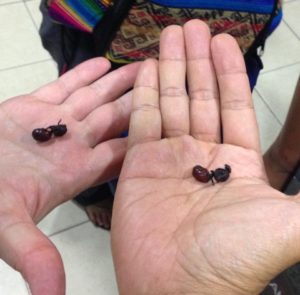 My first thought was that it tasted like peanuts.  A different flavor came out after I chewed it for a while and then I felt tiny ant legs get stuck between my teeth and I felt a little antsy (smirk), but I ate it all up.

Iloa later bought a tiny pack of the hormigas culonas to take home so that she can have her brother try it.  She said her brother always teased her for not being adventurous enough.

Early the next morning we were all packed in the Paravolar van that would shuttle us to the Chicamocha canyon launching site.  It was a very scenic ride and we got to see many sections of the canyon. 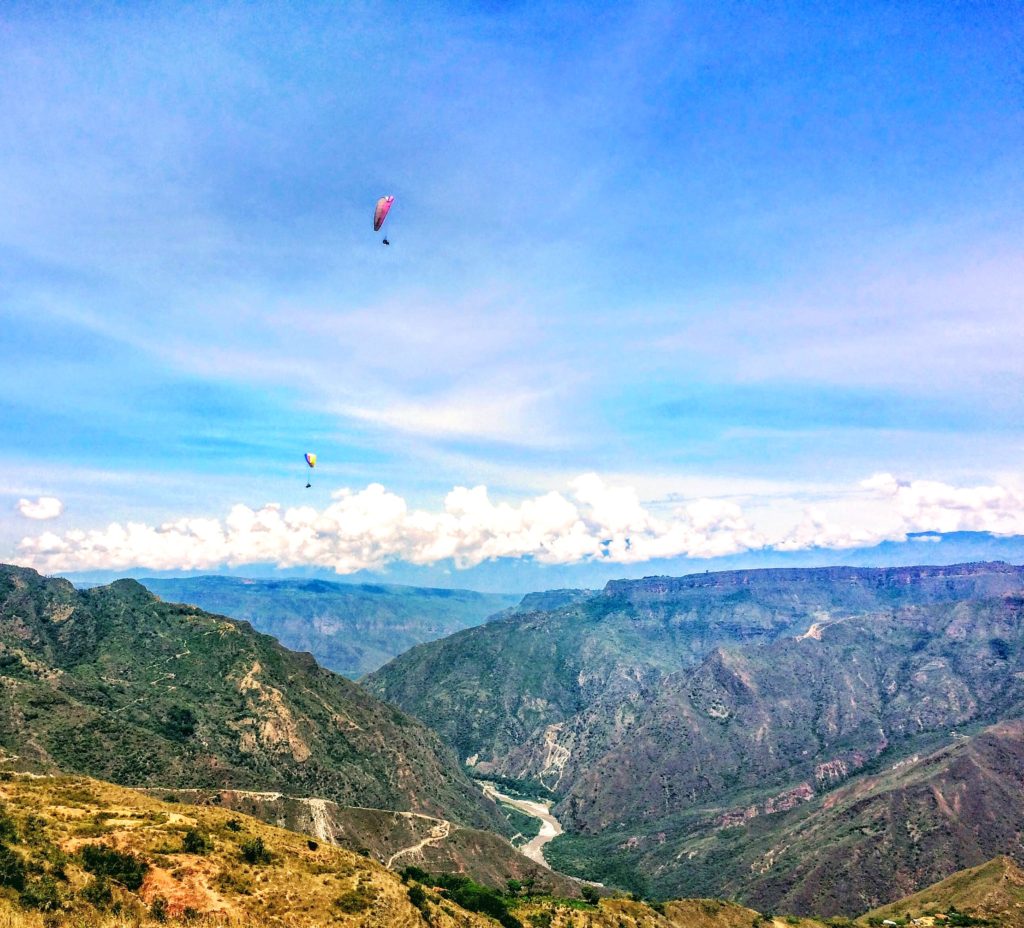 The view from the launch site was extraordinary.  Far below the cliff on one side, we could just see the Rio Umpala winding thousands of feet below us.  On the other side of the peak, we could see vehicles making their way through the winding road in the canyon.

After a few minutes of safety instruction from one of the pilots, they started hooking us up on harnesses.  With my helmet on, I stood there ready to go. My pilot pulled a few strings (literally) and in an instant, the wing that was once laid out flat on the ground was hovering above and behind us like a gigantic kite.  I felt a tug on the harnesses and the pilot told me to be ready.

They had instructed us to run as fast as we could off the cliff.  So I did.  I ran hardly a few steps before my feet could no longer touch the ground.  We drifted down a bit before the wind grabbed us and we began our ascent.

FLYING THROUGH THE SKY

After about 20 minutes of flying my pilot said, “Ok we are going down now to land.”

We continued to ascend.  After a few minutes my pilot said, “Um, we are still going up.”

I laughed and said, “I see that.”  We were in a strong updraft. 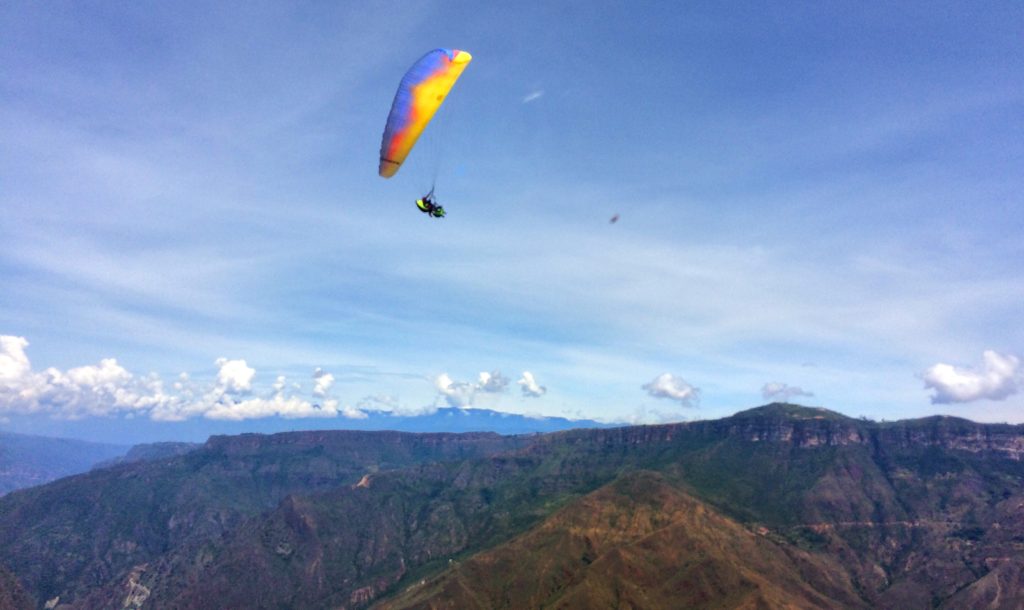 He then had to pull on one side hard to let the updraft blow through our chute and let us start to go down, pulling each side in turn as we went into a spiral descent.

I watched as the tiny dots at the launchpad slowly became people, and then we were approaching the landing site.  The pilot instructed me to lift my feet.  We gently hit the ground.

It was an amazing ride and an excellent way to see the canyon. 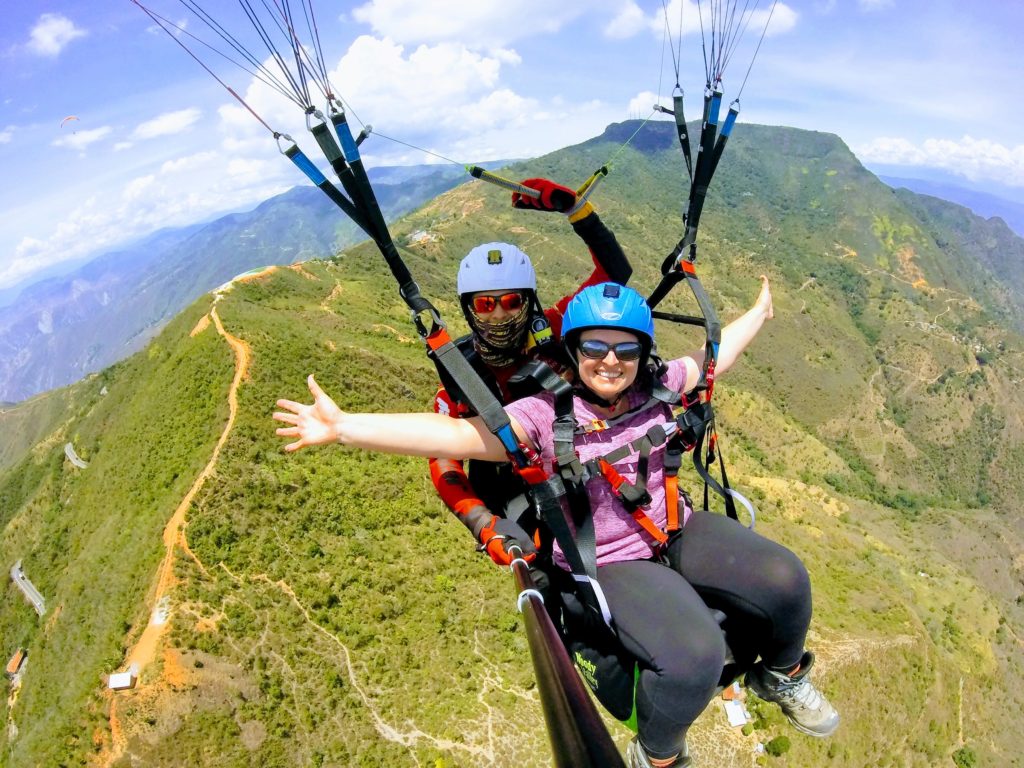