The first time we see something new, it sometimes seems strange.  Isolated groups of people often see the rest of the world as strange and often fear it.  But with prolonged exposure, the strange somehow becomes normal.

Here are some things that we now find normal that may be a little strange to some of you:

It is also referred to by some as the widow-maker or the homicidal shower head.  But in many countries where this shower head is widely used, it is simply called the heated electric shower head.

From the picture and the name, you have probably guessed how it works.  Electrical wires are run into the shower head where the wires basically purposely short out to produce heat.  Voila! You have instant hot water.  I won’t go into the dangers of electric currents into the conducting substance of water and the inherent dangers.  You all know the deal, if not, see the names given to it by all who see this as strange!

Indeed, Eitan, the guy in charge of maintenance and repairs to our properties back home,  recently saw a picture of these and said, “This is the craziest thing I’ve seen!”

I’ve actually come to love these showerheads.  Most places we have stayed in Central and South America have one of these shower heads.  A few places have solar heat, but most only have two other options.

The tankless propane heaters, known to kill people with deadly gas leaks, are the second most common source of hot water in a shower (at least in the places we stay).  It often requires the water to run a while to kick it on.  All the while I stand there very cold, getting additional cold breezes from the frigid water, feeling guilty for wasting water.  Once the hot water does arrive HURRY!  I might get a few minutes of hot water then suddenly I’m doused with cold water. AHHH!!

OK, maybe that is too dramatic?  The third most common shower option is cold water. However, unless it is extremely hot outside I find a cold shower to be absolute torture. Nope, not gonna do it.  I’d rather be stinky – deal with it.

This is when we sometimes do the “bucket shower.”  Heat some water, pour into a bucket and use a cloth, not too bad.

SIDEWALKS TO LOSE YOUR SHOE IN

If you are not careful you can easily lose a shoe or break a leg just walking down the sidewalk.  It is not uncommon to find large gaping holes in the sidewalk or the road.  No caution tape required here, and no suing anybody if you disappear into an uncovered manhole.  You have to pay attention, you are personally responsible for every step you take.  Not only are there large uncovered holes, the edges of the sidewalk range from even with the road to a few feet high depending on the hills in town.

There seem to always be dogs wandering around on their own or taking a nap in the park soaking up the sun.  While you are sitting in a restaurant, a stray dog often will wander in and look at you longingly for food.  Sometimes they race by as if on a mission, flying by you as you walk/stumble down the street.  Many of them have a home and they go there at night for food and to sleep. 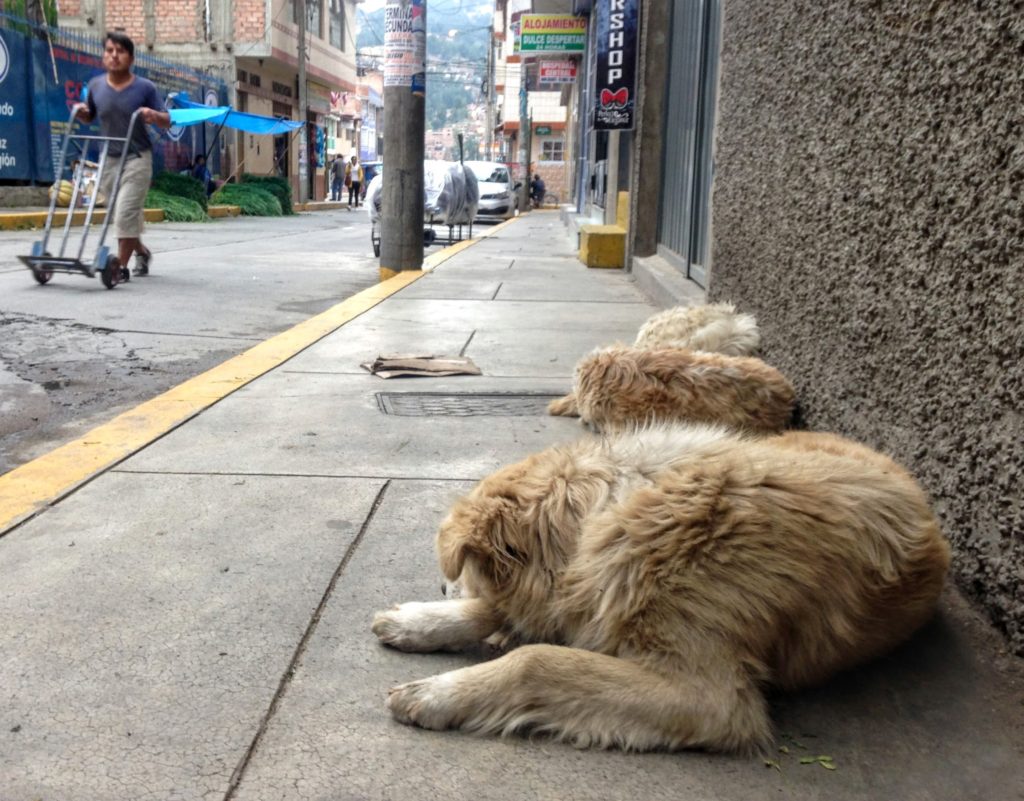 They are simply part of society.  Dogs dodge around people in a crowd, just like I have to.  They are let out in the morning to wander, meet up with other dog friends, or search for scrap food in garbage cans for the day.

Sometimes whole packs will be playing on the road.  Occasionally a fight breaks out.  But we have seen a few people fight as well.  Both are the same, everyone/every dog stands around and watches or else scatters if it is too bad.

Oddly enough I don’t find many drivers honking at dogs sleeping in the road.  They just go around them.  They seem to honk at everything else as I detailed in our Lima, Peru post.

The cool thing about the dogs having freedom is that sometimes they take it upon themselves to be excellent guides on popular trails.  This came in very handy when we were hiking in Guadalupe, Colombia

At first, this dog may frighten you.  They look like gargoyles and their skin is hot to the touch.  They are difficult to pet as your hand does not slide down their coat, but rather stick to their thin loose skin.

But after a while even their strangeness becomes normal, and I find them to be sweet and even cute.

It was certainly difficult to get used to at first, but no one throws toilet paper in the toilet.  It goes in the trash can.  The pipes and sewer systems here can’t take all the paper waste.  Now it is second nature to throw it in a trash can.  In fact, there was only one place we stayed in Panama where we could actually flush the paper.  I had to get used to flushing it again.

I also learned after many months that it is low class to simply throw the used paper as quickly as you can into the trash to get it away from you.  No, you must fold it over,  before tossing it into the trash – it’s the proper way.

Thankfully most trash cans have lids to keep the smell at bay.

It still has not become normal to me to have to pay to use a public restroom.  Sure it is only a few cents but it’s the idea of not having this public service that still seems strange to me.

I have learned to always have toilet paper in my purse just in case.  Many public restrooms don’t provide this even if you paid.

I’m always excited when I find a public restroom that has toilet paper, a toilet seat, and soap to wash my hands!  A good find.

Here you can build a house out of anything you can find.  There is no building inspector who is going to come and condemn your home and tell you you can’t live there, or at least there doesn’t seem to be.

I would not want this job. I’ve learned the good and bad side of this.  The good side is that you can build a home out of mud that will keep you safe and warm even if you are extremely poor. You don’t have to be homeless.  The bad side is, without codes, some of these homes are unsafe. When natural disasters hit, the death tolls are often much higher as a result.  The fact of the matter is many here would not be able to afford a home that followed the building codes that we have in the United States.

It is very common to walk under wires simply hanging above the street. I’m short enough to clear most of them but Trin has to duck.

THE DEFINITION OF POOR

I remember complaining about building codes when I was back in the States.  I now understand that, as a wealthier country, we can afford to have these codes and they keep us much safer.  It does raise the standard on what is poor.  Absolute poverty is defined by not having enough money for the basic necessities of life such as food, shelter, clean water etc.  It might cost more in the United States to rise above this line because of codes and food standards that do make it more expensive.  However, the quality of life is also much higher.

Most homes do not have clean water.  It must be boiled or filtered to drink, otherwise, you’ll have all kinds of stomach problems. I’m glad we have a Sawyer water filter.  It’s very easy to use, and it’s become second nature to prepare water with it.  In contrast, we hold to clean water as a basic right in the United States. Every day what I see makes me count my blessings.

We buy quite a bit of food from the open market.  The vegetable and flower stalls look beautiful in their displays. 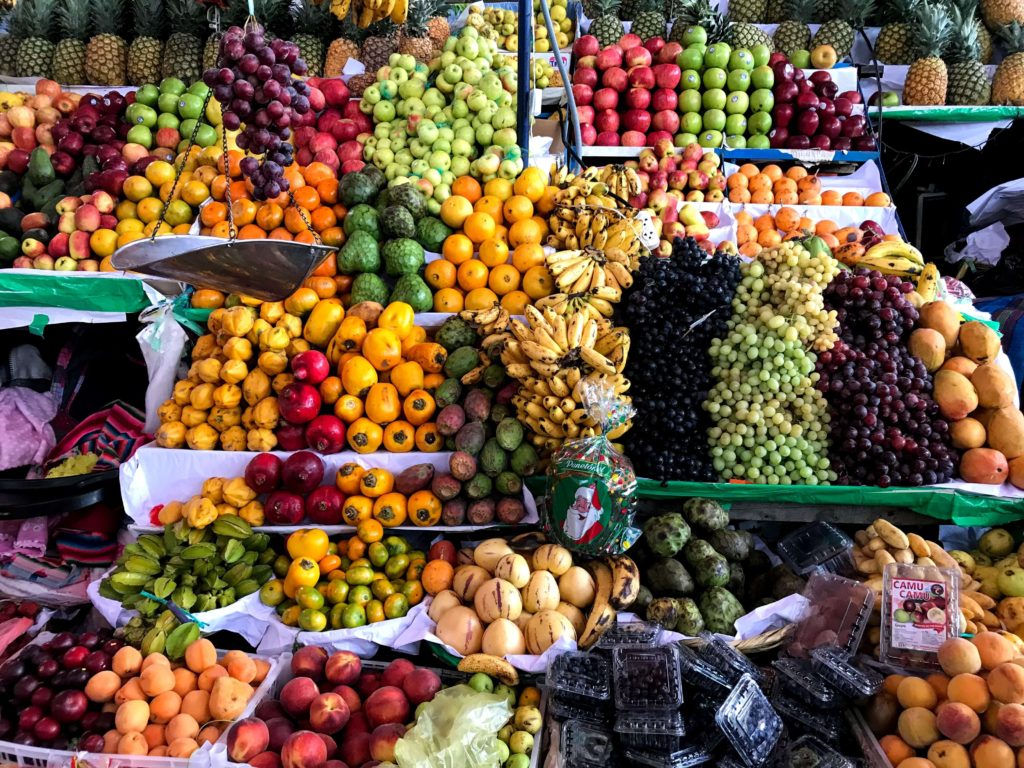 On the other hand, the meat sections took some time to get used to. Raw meat hangs and the stench is that of blood and sometimes rancid meat. Of course, the dogs wander around freely through the market. I’ve caught a dog or two taking a quick lick of low hanging meat.

They do what works and move on.  Life is sometimes more simple this way.

What did you once find strange that is now normal to you?  Would love to hear from you in the comments below. 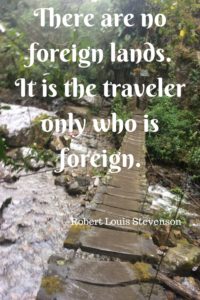 6 thoughts on “When the Strange Becomes Normal: South American Travel”