We stood at the top of a cliff in the middle of Torotoro National Park mesmerized by the waterfall tumbling over the side. We had used a rope to navigate over the smooth steep rock surface to the edge of the water. Our guide turned to us and said that we could go into the cave from which the water was emanating.  It looked a little precarious to most of us, but Trin decided to try it.

Trin shimmied over a large boulder and then slipped. He skidded almost waist deep into the water. He climbed his way out and traversed the path into the mouth of the cave.  The rest of us watched from the ledge. Unbeknownst to us, this one slip would later put Trin on bed rest for at least a week or maybe longer.

Well, it has been one week now.  I’m sitting here in Sucre, Bolivia in a nice little Bolivian home writing this week’s post. Evidently, Trin overextended the muscles and tendons connected to his big toe and it has been very painful. When we arrived at this Airbnb, Trin had a very pronounced limp.

Our host called her father who happens to be a doctor. He came to our room to examine his foot. He applied topical anti-inflammatory medication and wrapped it. Then he came back later with an anti-inflammatory shot. Trin took the shot in the butt, a photo opportunity that I regrettably missed.

Although it may seem so, it is not our intent to test the healthcare system in every country.  We’ve had dental work in Costa Rica, knee surgery in Panama, and deep wound treatment in Nicaragua, but I guess it’s turning out to be a trend. I can report that the bedside service here in Bolivia was very nice.

THE TREK TO TOROTORO

Torotoro is a remote, small town, only about five blocks deep and wide. It is accessible through a long gravel road from Cochabamba.  The 5-hour ride was bumpy and exhausting but the scenery was astounding.

A few times we had to do stream crossings, and we even stalled in the middle of one.  There was a lot of road work going on.  At one point, we were going through a construction zone when a huge boulder rolled in front of the van. It wobbled and settled in the middle of the road.  There was just enough space for the van to go around it. Further down the road, a small landslide blocked the road.  We had to wait a bit for the crew to clear the path.

On the ride in, we met a couple named Dominic and Maria. He is from the UK and she is from Spain. They were easy to talk to, and we ended up spending some time with them in Torotoro.

On our first evening, we bumped into Xavier and Catalina along with their sweet little boy. We had met them in La Paz and had taken a bike ride on death road with Xavier.  We spent our first day in town with them just walking around to see the sites that didn’t require a guide or a park fee.

WALKING ON THE BOTTOM OF THE OCEAN

We hopped along fossilized footprints left by dinosaurs eons ago and wondered at the large prints followed by smaller prints.  Was it a mother and child?  Or a small pack of raptors chasing a larger dinosaur?  We followed a path further up into the valley enjoying conversation with Xavier and Catalina skipping on rocks trying to keep our feet dry over each river crossing.

We followed the road further up the valley outside the town to a place called the turtle graveyard. The graveyard has a museum with two reconstructed turtles fossils, and a whole bunch of small dinosaur dolls scattered in the display. The graveyard itself, however, was an outcropping of red hills. While there were no actual turtle graves the red hills were stunning against the green valley and rocky mountains.

The landscape looks as if a massive hand did a karate chop creating a valley and pushing the sides straight up each side of the hand.  The broken ledges at the top of each mountain reminded us of the landscape in Capitol Reef National Park in Utah where a similar phenomenon seemed to have happened.

This valley at one time was covered in ocean waters. It now rests at 8,900 feet above sea level.  Just think about that a bit. This once large oceanic floor was broken by movement in the tectonic plates and then thrust straight up into the sky.

Marine fossils can be observed during the 7 Vueltas tour which also takes tourist up one of the ridges of the mountains.

One side of the valley looks like a set of crocodile teeth.

JOURNEY BACK IN TIME

As we hiked up to the summit of one of the ridges that resemble the croc teeth, the trail led us through layers of sediment standing vertically next to us. Each layer represents a different phenomenon. The “top” (which is now the side) of one layer was wavy, just like the sand on the ocean floor. Another layer was filled with oceanic fossils, small shells packed together creating beautiful rocks. Other layers revealed dinosaur footprints. It was like walking further back in time with each step to see the remains of animals long extinct.

On this trek, Dominic and I discussed the various theories of origin. It is such a joy to talk to those who can reasonably discuss anything, no judgment, no shock that someone might think differently than they do. Someone who understands the difference between scientific fact and theory and is willing to test theory against observation and logic.

Not only is Torotoro full of stunning views, dinosaur prints, fossils, and amazing canyons, it also offers spelunking. Little did I know that in the middle of Bolivia, I would be sliding down a frigid, calcified surface deep in a cave illuminated only by our headlamps.

“Squat down on your feet and slide down here. We will catch you at the bottom,” our guide instructed us.

The smooth, calcified floor of the cave had white streaks where the mud had been pushed aside revealing the flowstone as others slid down this smooth surface deeper into the cavern.  One by one we skidded down. I ended up going down on my butt regretting the choice of thin pants that transferred rock burn almost directly to my skin. My pants were already soaked from an earlier crawl between stalactites and stalagmites, where small pools of water collected on the cave floor.

In other sections, we were on our bellies squeezing between rocks to the next passageway. The sound of water faded as we slipped through crevices. Then just as suddenly, we would enter a cave room and the sound of the rushing water would fill our ears.

Everyone turned their heads toward the sound, and the collective illumination of our headlamps revealed an underground waterfall.

In one of the bigger and quieter chambers of the cave, we sat down and turned our headlamps off. Cool air settled around us and the darkness was complete. I found it peaceful. The stillness was only broken by the soft dripping of water.

We climbed, scrambled, squeezed and slid, sometimes following the underground stream, at other times walking or crawling between stalagmites.  It was the kind of adventure that fills the senses and excites the little kid in all of us.

TOROTORO IS A GEM. HERE’S WHY

Not only is the valley a geological wonder, the landscape is stunning and the adventure level is just right. The park service is a step above any other we have experienced in Bolivia.

The tour guides were really great. They seemed to be enjoying themselves and were concerned that we also have a great time. Often they would ask, “Are you enjoying this?” or “How are you doing?”

We could tell it was more than just building their business. They truly seemed to want us to have a great time and enjoy their beautiful region.

There was even a town official going around surveying tourists to see what they like and what Torotoro could do better.

RAPPELLING OVER THE EDGE

So back to the waterfall. Despite the slip into the water, this turned out to be our best day in Torotoro National Park. We had an amazing fun loving group, even our guide stripped down to his skivvies to join us in the frigid water below the falls. We swam up the stream to find two more small waterfalls. The water emitted a light turquoise blue color and flowed over smooth rocks. Sounds of pounding water soothed the senses and the sun warmed the skin when we finally emerged from the frigid water.

Part of the group decided to try rappelling. Since Trin had never tried it before he joined in.  Starting on the ledge of the waterfall he rappelled his way down and yelled out in triumph filled with delight and yet tinged with the shock of cold water as it pummeled his face and tore the sunglasses off his head. It was the pair of sunglasses that Frank gave to me in Galapagos when mine broke. Sorry, Frank – we enjoyed the Oakleys you gave us for a long time.

Dominic and Maria were the last “kids” to emerge from the water. We are only as old as we play, right? 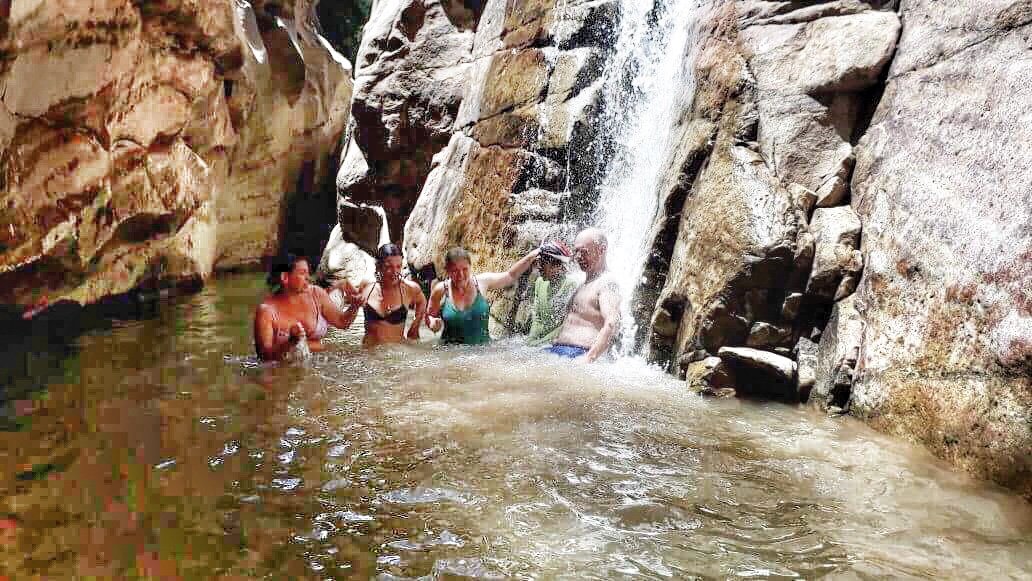 All of us lay out on the rocks to soak up some sun and dry out a bit. We passed out snacks, took a lot of photos, chatted, laughed, slipped, and screamed. Our guide told stories about the area. The sun was shining at an angle, creating shadows in the canyon walls, and spreading tiny glimmering diamonds on the water surface. What was supposed to be a four-hour tour turned into an all-day outing, and I lay there hoping that the day would never end.

7 thoughts on “Dinosaurs and a Walk in the Past: Torotoro”