It is a desert. At first glance, one may be impressed by the flat-topped mountains that surround the valleys but there is so much more. It is in the exploration of this area, in the details, in the hidden-away caves and waterfalls that fly, or in the beautifully carved stones of the rivers, smooth and vibrant, that one is drawn into Chapada Diamantina.

Our first stop in Chapada Diamantina was the small town of Lençois. It is a beautiful, little town. The streets of precisely laid pavers and cobblestones, narrow and steep, lead us between beautifully colored houses. Chairs and tables from the restaurants fill Rua das Pedras at night and musicians serenade the diners.

We booked extra time here to both explore and relax.  I knew very little about this area before arriving.  We came here really because of a couple of cool pictures that I came across on a post about Brazil.  I came to see the enchanted caves but found so much more.

Rather than take a tour we spent our first day wandering some of the trails in Chapada Diamantina that were accessible from our Airbnb (get $40 off your first stay if you use this link).  After following the trail to Cachoeira Serrano through dry brush and dusty ground we emerged at the edge of a river.

Before us lay one of the most colorful river beds I have ever seen. I reached down to feel it, it was as smooth as it looked. Rocks of emerald green, rose, blue and a dozen other shades were fused together. They lay open, cut and smoothed to a glossy finish by the constant flow of the river.

We watched as one couple made their way across the river never stepping in water deeper than their ankles.  A teenage boy, a bit taller than me, was walking down the river in their direction. He suddenly disappeared. We watched as one of the holes in the river bed completely swallowed him up. As he plummeted he raised his hands over his head and they disappeared quickly along with the rest of his body. The hole of water was deeper than his height even with his arms extended up. 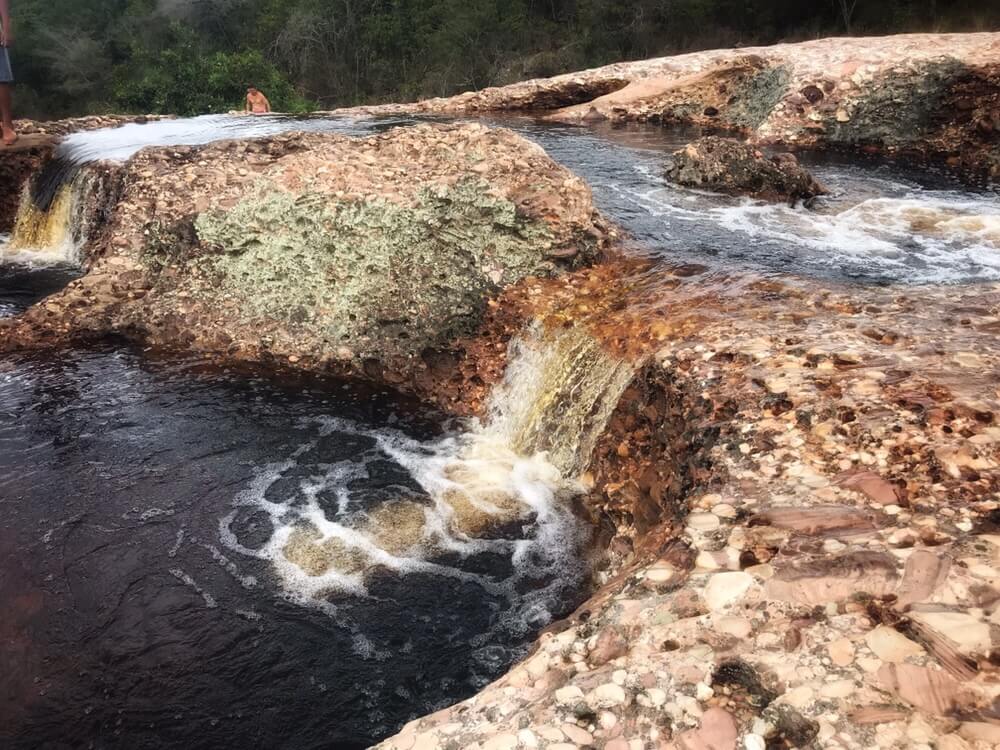 Thankfully this boy was also quite a character.  He knew about the hole and created the dramatic scene to shock the couple walking across the river.  We watched him climb out of the hole and do the same thing a few more times.

In many places, the river is so shallow that the water appears clear and the slight tint enhances the colors of the rocks beneath it. Where the water pools deeper the darkness of the tannins clearly reveal where not to step, but how deep it might be is not possible to determine without stepping into it. 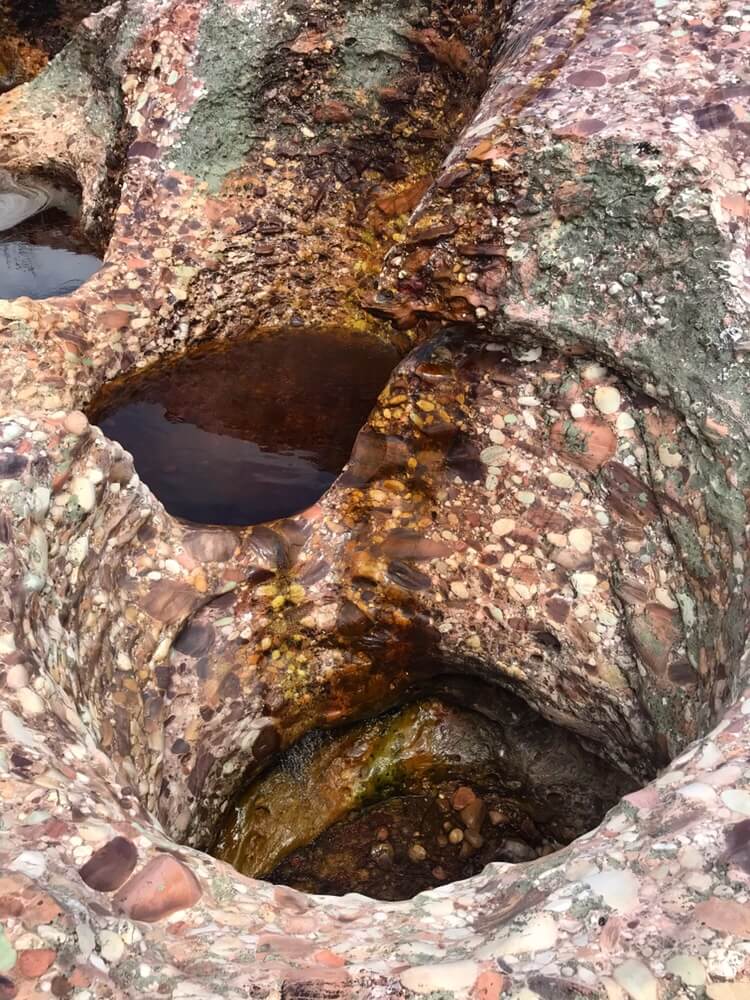 Because the river is made up of so many different rocks compressed together it is common for these large holes to form. They reminded us of Las Gachas de Guadalupe in Colombia where similar, natural jacuzzis dot the riverbed. Over time erosion can loosen the natural “cement” surrounding a rock. The loose rock begins to move around in circles pushed by the continuous water flow.

These rocks get stuck in its original divot in the river bed. Water that falls into the hole creates a swirl that moves the rocks around. As it swirls it begins to chip away the “cement” around it.  Over time the hole becomes bigger and bigger.

Eventually, other rocks are freed up and join in the process of making the hole even bigger. The final effect creates a “spa” river bed where families sit around their own swim holes and enjoy a peaceful afternoon on the colorful ledges. 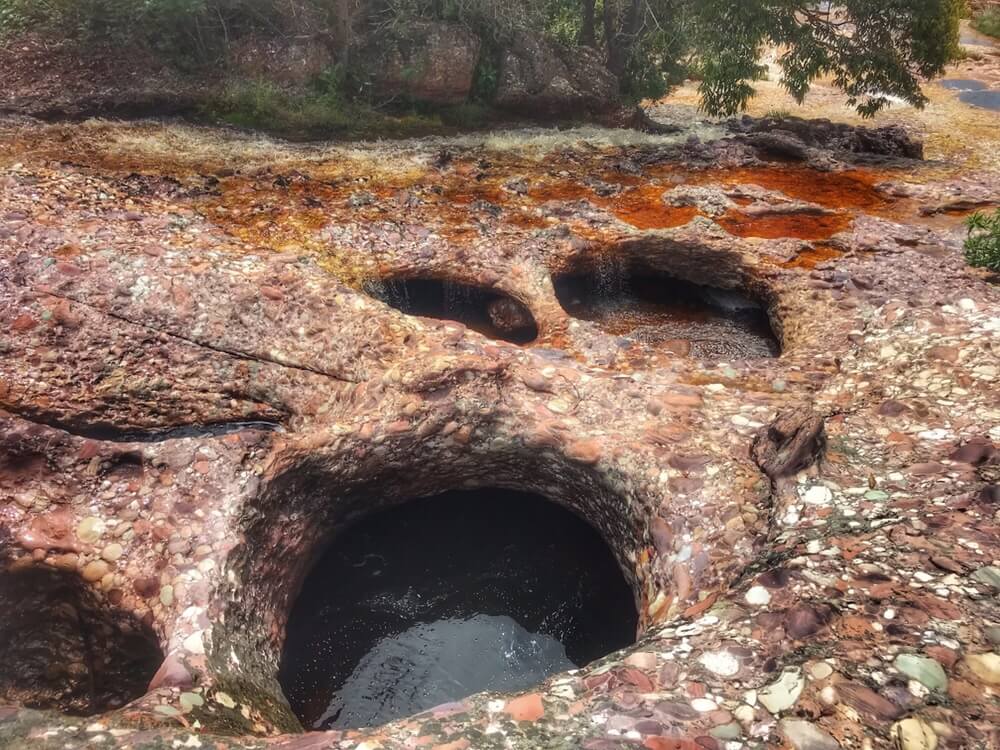 About an hour’s walk outside the town of Lençois is a place called Ribeirão do Meio where the river drops down a smooth incline. It becomes a perfect natural waterslide similar to Slide Rock near Sedona, Arizona except that here the colors range from white to jade and pink.  At the bottom, sliders are dumped into a dark pool of water where many families come to spend an afternoon swimming.

Further up that same trail, a small hidden waterfall can be found that can provide a much-needed massage. At least that is what it was supposed to do, but the sound coming from the girl beneath it were telling a slightly different story.  The intermittent screams were a cross between fun, pain, and a deluge of cold water.

Caeté-Açu, aka Vale do Capão

If you are looking for an even smaller town than Lençois, then Capão might be an option for you.  Capão is about a two-hour trip from Lençois on the western side of the park. One hour on a bus, the second hour in a four-wheel drive truck over dusty, rutted roads.

This village is deeper in the heart of the Chapada Diamantina national park and seems to be the mecca for those looking for a spiritual connection to nature.  When our truck arrived in town we parked in front of a little shop advertising a palm reader.  The colors, paintings, and offerings in the tiny stores reminded me of the town of Pisac in Peru where many believe there is a vortex of power from the land.

The people walking around exude the same atmosphere with their gypsy skirts and multi-colored shirts and blouses. On the evening that we arrived in town, there was a musical performance in the village pavilion where they had set up a backdrop of panties strung together like rainbow streamers. Jugglers were performing on the street and jewelry peddlers laid out their wares on the ground. I’m not into palm reading or the worship of nature itself as a higher power but I could understand their draw to the area.

From here, there are a few hikes that can be done, either by yourself or with a tour company.

A Waterfall that Flies

On our first full day in Capão, we hiked out early in the morning to find a waterfall that they say is so high that the water never reaches the ground.

Using Maps.me to navigate, we followed a dusty road northward to a turnoff that leads to the trailhead. We had to sign in at the gate where you could hire a guide if you prefer. The path is well-trodden and with maps.me it is hard to get lost, so a guide is not really needed. It was a sunny day and the shrubs of the desert provided very little shade to escape the heat.

The next full hour we climbed a steep trail of sandstone. Footsteps were carved out of the sandstone trail from the many who passed this way before us. We could see Morrao mountain in the distance, and we also had a good view of the Capao Valley.

Eventually, we reached the top of the plateau and the trail became flat for the last portion of our hike.  Everything around us seemed flat and we began to wonder if the second tallest waterfall in Brazil could actually be nearby.

There are two main viewpoints that you can go to. We went first to the panoramic viewpoint which veers to the right. This viewpoint allows one to see the falls from the side. Apparently, there had not been a lot of rain in the prior days so the water flow was weak. We almost had to squint to see the fine stream. Nonetheless, the valley itself is a spectacular sight.

Crawling to the Edge

The second viewpoint is from the top. We crawled our way towards the edge of the cliff, I’m not ashamed to admit, I crawled.  I can fall on a flat pathway, I’m talented that way. I’m definitely not going to walk on the edge of a cliff that plummets over a 1,000 feet.

As we peered over the edge the wind from the valley lifted our hair and cooled our skin. It was there we could see that the locals were right.

The wind was so strong it blew the water that was falling over the cliff back up towards us and covered us with mist.  This is where it gets its name: Fumaça, which means smoke. The water turns to what looks like fumes. 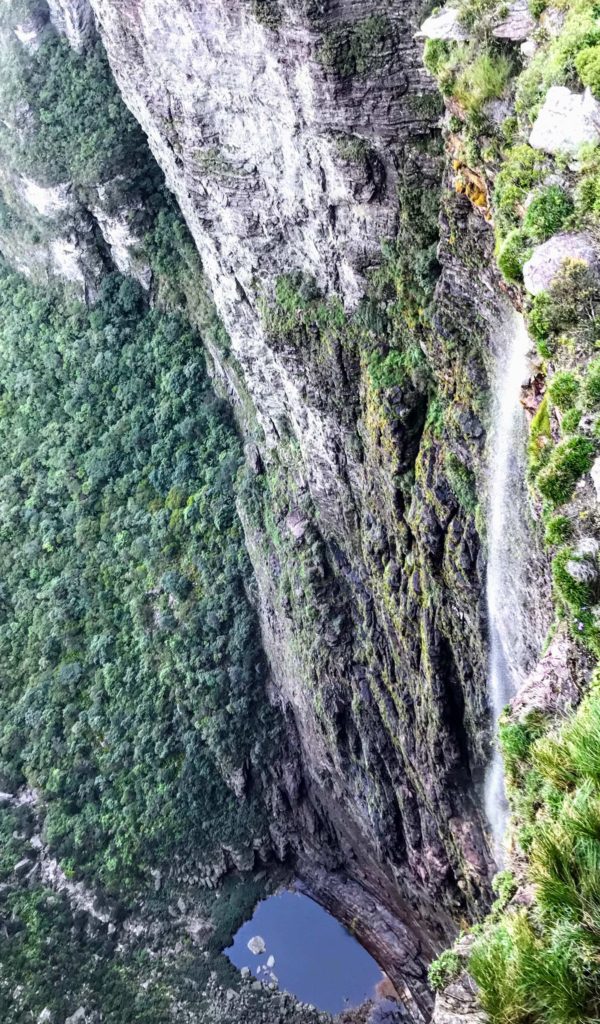 Chapada Diamantina not only has enchanted caves but also waterfalls and beautiful plateaus.  It is definitely a place to explore.  In Lencois, we climbed Morro do Pai Inacio to see the sunset. This is the classic postcard view of the park. It’s an easy climb up from the parking lot and the top has an interesting landscape and a 360º view.

Brazil is full of surprises with blue pools in white sand dunes, enchanted wells, and waterfalls that fly.

6 thoughts on “Waterfalls that Fly in Chapada Diamantina”