Mendoza, Argentina has been a journey into many art forms for us, from its tree-lined streets and charming parks to its surrounding wineries and the friendly people that live in it. We came to see the city and to sample the wine, but we ended up with so much more.

Mendoza is built with deep irrigation canals that cover the entire city. Their design and inlaid stones are not only practical but also a work of art.

Irrigation trenches line the streets, some covered, some open and deep.  Be careful where you step. It would not be a great place to get drunk and stumble around (not that there is any place where you should do that). Maybe that’s part of survival of the fittest here.

Water from the snow melting in the mountains that surround the city is directed down to these Mendoza streets to make it the green oasis that it is today and has been for centuries.

The canals have their origin with the Huarpes people who occupied this region about 500 years ago. The Incas arrived around 1470, their technology was an important step in improving the canal system that is still in use today. 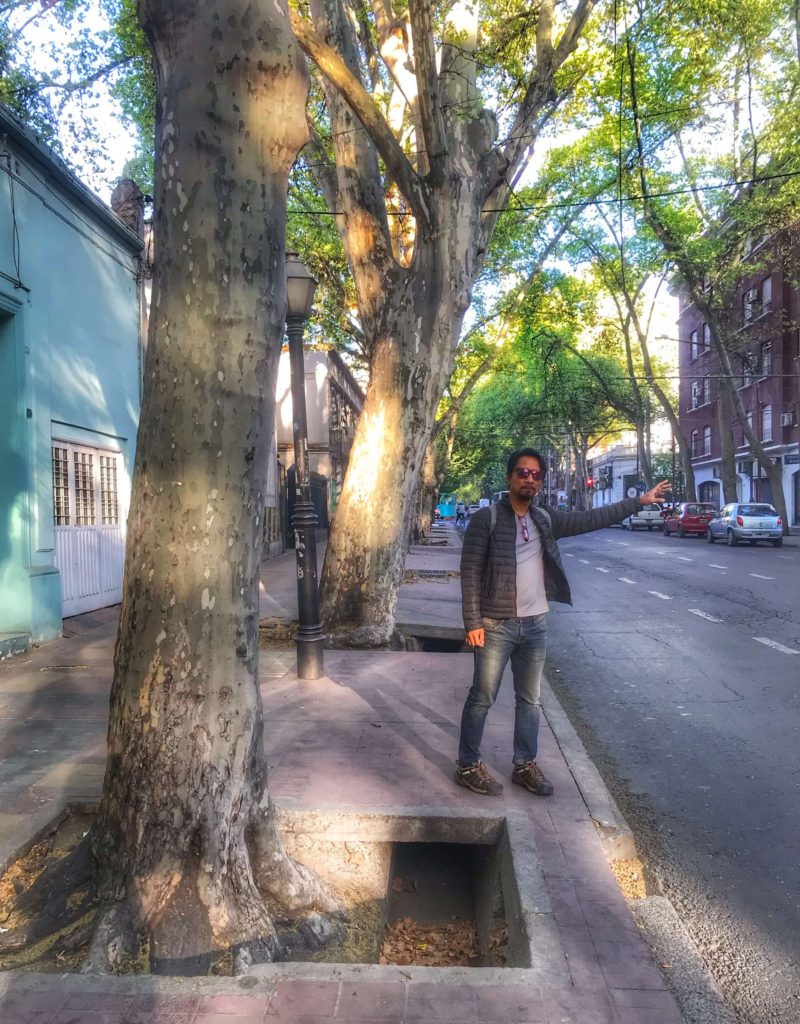 We wrote about how the Incas seem so advanced that they “planted water”. This is yet another lasting example of the brilliant engineering of the indigenous people that has lasted for centuries. This irrigation system keeps the desert city of Mendoza green even today.  Massive trees line every street watered by the irrigation canals.

Downtown Mendoza is a pleasure to walk around. You don’t have to walk far to see green areas like the beautiful Plaza España, Plaza San Martin (not to be confused with the massive Parque San Martin), and the symbolic Plaza Independencia, among others. Central Park north of the city is also worth going to.

See more of Argentina and the lakes region

Ivan and Nora, an Artist Couple

We based ourselves in a home just outside of Mendoza, in the town of Maipu. Our hosts were a  couple made up of two talented artists. Nora is a geneticist who has taken up art, while Ivan works in IT and has also produced some beautiful artwork. Together their home is filled with their works of art.

From the moment we walked in the door we were welcomed into a home, not just a place to stay.  We don’t often share too much information about our journey with our hosts, especially about the fact that we are retired and no longer earning an income. In fact, I usually only talk about that in this blog and in some of our interviews.

With Ivan and Nora, however, we found ourselves spending late evenings over a bottle of wine talking about travel, our goals, art, and all the things we love.

See also “Where is home for a digital nomad“

“You Are Eating Your House”

On the coffee table in the living room stands one of Nora’s sculptures. It’s a flowing abstract made of plaster. She showed me the inspiration for the artwork, a conglomeration of barnacles. It’s a piece that catches the eye and I really like it. She showed me her other works which she would be presenting to her art professor in a few days time. Her enthusiasm is uninhibited and she speaks almost always with some level of excitement on her face that is genuine and infectious.

Up on a wall were two paintings, one shows a pair of men’s eyes, the other a pair of women’s. It’s like a self-portrait except that it’s cropped to a narrow, horizontal rectangle showing only the windows to the soul. I found it mesmerizing. It’s one of Ivan’s works.

Together, Ivan and Nora have had their share of travels and continue to do so. At the back of their house, there is a trailer that they’ve taken to Patagonia and the Argentinian coast. Ivan was very intrigued with our travel and the fact that we sold everything that we owned.

“So you are eating your house,” he exclaimed one evening while we were all having a home-cooked dinner. I’ve never thought of it that way but he was right. For our first couple of years, we are living off the proceeds of the stuff we sold. In fact, we haven’t even used up the money from selling all the stuff that was in the house.

The Art of Wine

In the 19th century and into early 20th century Mendoza experienced a wine boom. At that time it was the fifth largest growing area in the world. It is known best for its Malbec. Even today this region produces almost two-thirds of the entire wine for Argentina. Mendoza is filled with bodegas (wineries/wine cellars) both old and new.

As we navigated the streets of Maipu and Mendoza we saw vacant buildings that were once large wine producers. Yet the countryside is still filled with vibrant vineyards. We walked for miles past massive vineyards taking up the entire landscape that seems to reach the snow-capped Andes seen in the distance.

One day, we walked over to the Tempus Alba winery. The vines near their bodega are newer and use a drip system of irrigation.

We sampled their Malbec on a wooden deck overlooking the vineyard. Music played softly, in the background we could hear the gentle dripping of irrigated water running along the rows of vines. The wine was smooth and the wind gently cooled our skin from the long walk. The blue skies lured us into silence as we gazed at the landscape.

“Swish the wine around, it awakens the entire mouth,” I said, trying to sound proper.

Trin moved his glass in a circle to see how much body the wine had then smelled the wine to detect its essence. He sipped it and pulled air in through his teeth to release the flavors. Then he looked at me and started to laugh.

Our attempt at being connoisseurs simply wasn’t working. We will never be mistaken for wine connoisseurs but we can still enjoy the beauty of Mendoza valley and the art of the wine

Brigitte and Philippe Subra built the CarinaE winery in 2003 from an old vineyard still existing on the ancient canal irrigation system. They rebuilt the bodega and created a beautiful boutique winery with their own special blends.

Newer vineyards install the drip system to irrigate the vines. Drip systems keep the roots shallow. In contrast, older vineyards like CarinaE’s that were built using the old irrigation flooding system have much deeper roots.

Vines from these vineyards would dehydrate and die off if they tried to convert them to the drip system because of the depth of the roots. Older vines often produce fewer grapes, but the grapes that they do produce are more concentrated and creates a much better wine.

A vine that produces many grapes produces a light wine and is often cheaper. The vines that produce only a few bunches are putting all their effort into just those few creating something much stronger and more valuable. It mirrors life. Producing in quantity often makes things cheaper. 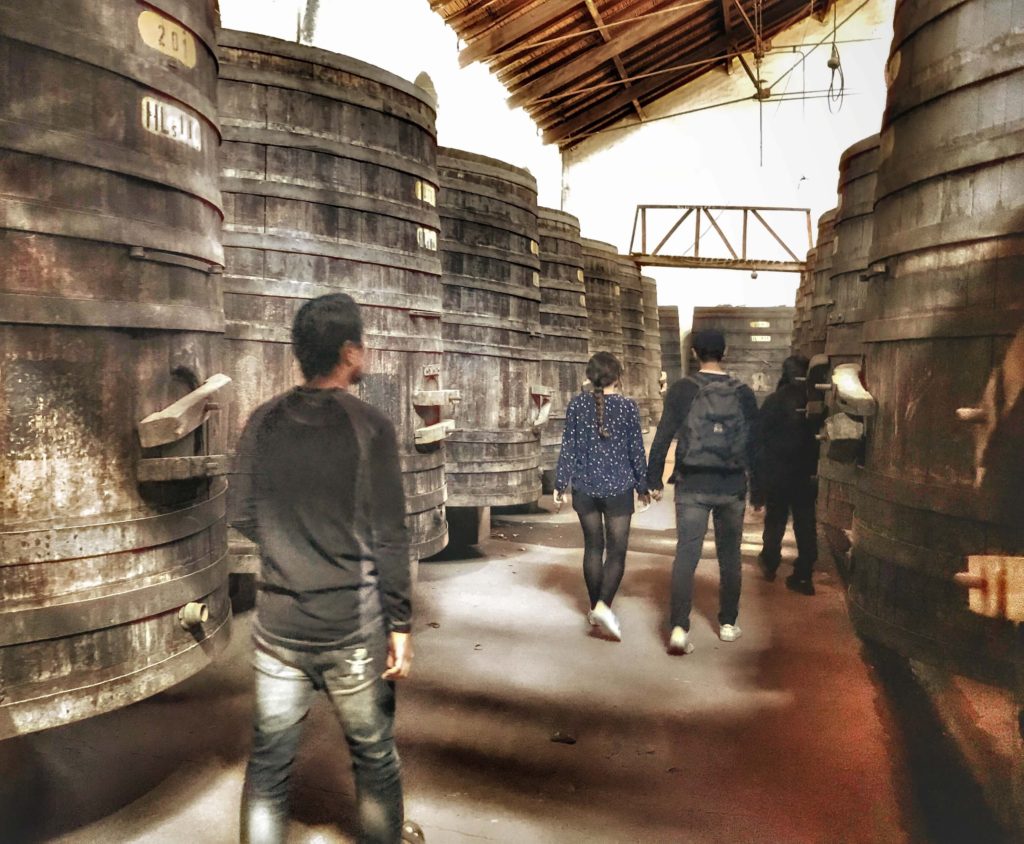 Nora and Ivan invited us not only into their home but into their lives. They shared their hopes and frustrations about buying a lot to build their new home. By all indications, theirs is a happy home with their two dogs.

They took us to a Saturday brunch with their artist friends. The host was a retired principal named Mireya. Her apartment is also filled with artwork that are hers and also of her father who was also an artist himself. It’s an impressive collection, and in the middle of the living room is a table filled with works-in-progress.

“When you are moved by art you are for a moment feeling the soul of someone else,” Mireya said as six of us sat around a tiny kitchen table eating an ice cream pie.

“When you are moved by art you are for a moment feeling the soul of someone else,” Mireya

Her insight left me silent and remembering the times I have been moved by art. Most often I’m moved by the art within nature and art that communicates their messages well. She’s right, I do feel something: a gift given by another.

I’m not a museum person. I like paintings and I had even dabbled in art myself in the past. But I don’t seek them out. I see a painting or a sculpture and it could move me, or it would just make me go, meh.

Just the night before, Ivan and Nora showed us pictures of the night-blooming cereus that they have in their backyard.

The cereus flower blooms only once a year, for a duration of only a few hours. It goes from a bud to a beautiful flower, and then into wilt all in one night. Art truly comes in all forms.

On one of our last few days in Mendoza, Nora and Ivan took us for a drive. We went through the neighboring towns of Godoy Cruz and Lujan del Cuyo. Then we drove through scenic route 82, stopping at the Cacheuta Thermal Spa (Ivan is convinced that the water is not heated by natural means). 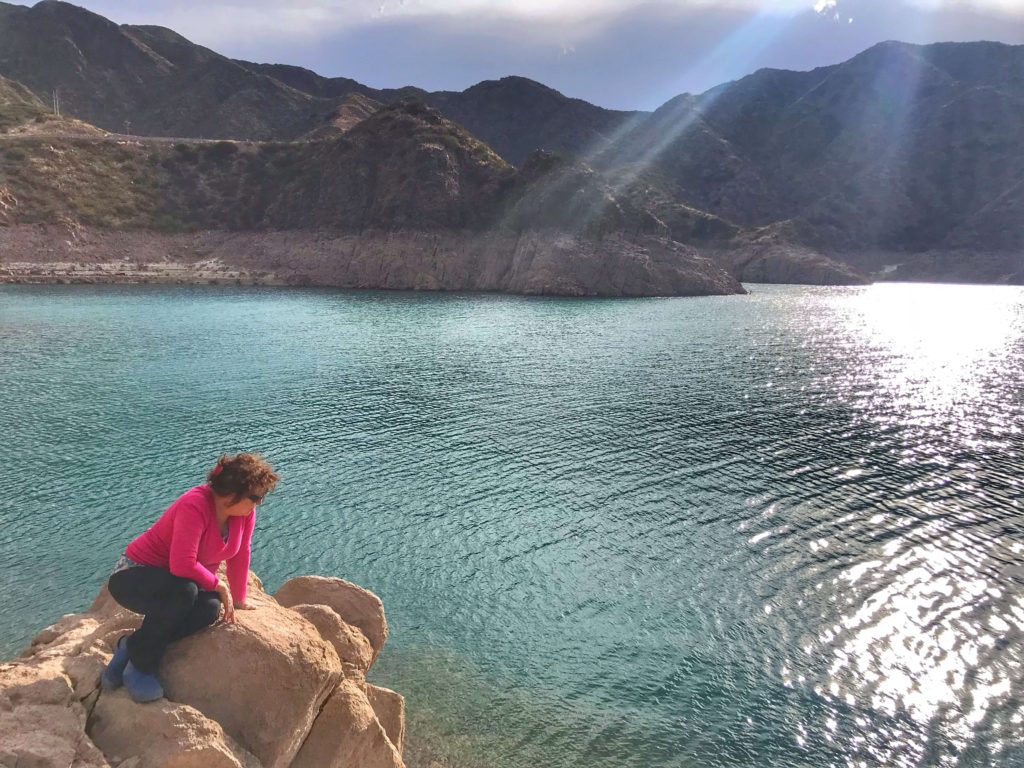 We reached Lake Potrerillos in the late afternoon and we strolled along the lakeshore talking about past and future travels. The lake is beautiful and calming as I contemplated the past few days we’ve spent with this wonderful couple. I’ve enjoyed their company, they are so nice and welcoming. 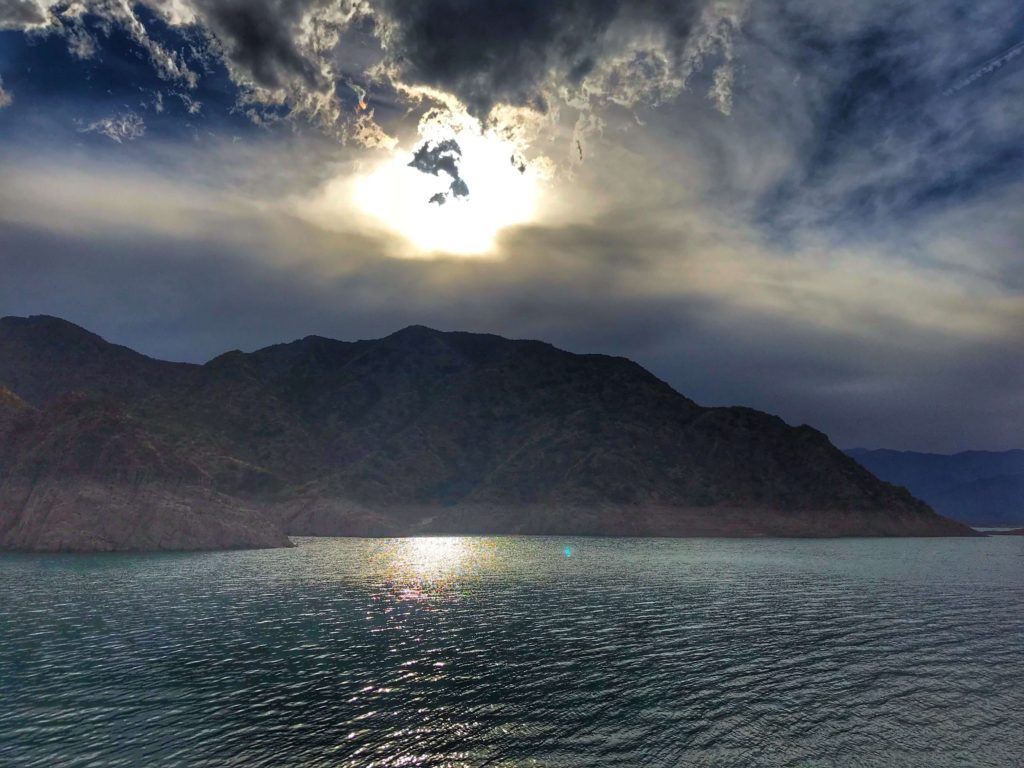 We vowed to see each other again in January when they do their annual trip to Las Grutas and we make our way up from Patagonia.

What are your favorite forms of art? Let us know in the comments below. 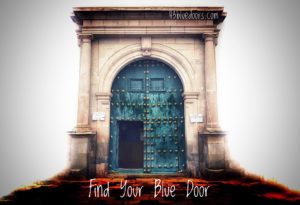