I held up the little stuffed bear and ran my fingers through its tiny purple cape. The bear was not even especially cute, but it held much sentimental value to me. Todd, my best friend in high school, gave this little bear to me. Todd died just a few short years later of cancer while I was in college.

Trin and I were clearing out our house in North Carolina selling or giving away just about everything so that we could take off to travel the world free of stuff, just us and our backpacks. That was over two years ago and I still remember how hard it was to think of parting with that stuffed toy.

It wasn’t the bear itself, it was the value I attached to it. It was the memories of Todd and the laughs we had together, it was the sadness of his parting.

Holidays are sentimental. We grow up celebrating specific days and we build memories attached to those days. In America, we may celebrate the fourth of July in honor of our country’s birth date. While it truly is a patriotic day what are the memories that actually come to mind when you think of the fourth of July?  Time with family and friends around the BBQ? Watching a large fireworks display with friends or family?

Thinking about the holiday brings excitement because of the memories we built over many years. It is why so many families have holiday traditions. These traditions can make us feel good with their sentimental value.

May 21st is Navy Day in Chile. It is a Chilean public holiday to commemorate the battle of Iquique during the War of the Pacific.

On that day in 1879, Chile lost a battle against Peru in the port of Iquique. Although the loss was devastating, the death of Captain Prat that day and the loss of their oldest wooden warship which he captained inspired many Chileans to join the military. This is thought by many historians to be the most important factor that led to their ultimate victory.

We were in Iquique on Navy Day and watched the massive parade. Those in the military service were all decked out in their finest uniforms. Flags were flying in every direction we looked. The pride in their country saturated the air and it was beautiful. A people proud of where they live, a people who care about their country and each other.

Even from our outsider’s perspective without the years of memories we enjoyed the celebration. Although I’d argue that maybe some of the sentimental values I have for our own Fourth of July carried over to me that day.

The War of the Pacific also referred to as the “ten cent war,” was started over an unfair tax imposed by Bolivia, and it made me think of the Boston Tea party. This day in Chile celebrates victory and freedom. It celebrates the good things in life.

The Other Side of Navy Day – Protests

There is another side to the story. There are some here in Chile who despise patriotism because of atrocities in the past. Under the dictatorship of Pinochet from 1973 to 1981 thousands of citizens were tortured and murdered.

Pisagua, a small town north of Iquique, was used as a concentration camp during this dictatorship. It is one of the memorials we paid our respects to. It is a remembrance of the tragedy of lives cut short by evil. An important reminder so that we don’t repeat history and we can remember those who fought for our freedom.

There are those who see patriotism as condoning everything the country has ever done. But I have met some of these people marching and they share their desire for justice after the Pinochet era. They also recognize the good in Chile, the freedom they now have and they celebrate the good.

While were in Bolivia it seemed that there was a parade every week, sometimes more frequently. At some point, I stopped writing down what the celebration was. There was always something being “celebrated” or protested. Maybe it was an excuse for the men to walk down the street together drunk and make noise – one of the local bystanders told me so.

It seemed to be the same thing over and over. Women in the colorful clothing of their indigenous roots dancing the steps they had practiced (as in the cover photo). Behind them was a group of men holding their beer high emitting drunkard laughs staggering after the women.

We made sure to steer clear of the Tinku festival celebrated in certain parts of the country. We had no desire to witness fights and death or be a part of it.

December 8th is Immaculate Conception Day celebrated in many countries including Nicaragua, where we experienced it. It is a Catholic holiday celebrating what they believe to be the immaculate conception of Mary. We were in Leon, Nicaragua on Dec 8th, 2016 for this celebration. Since Leon has the largest cathedral in all of Central America it is a mecca for the religious holidays. 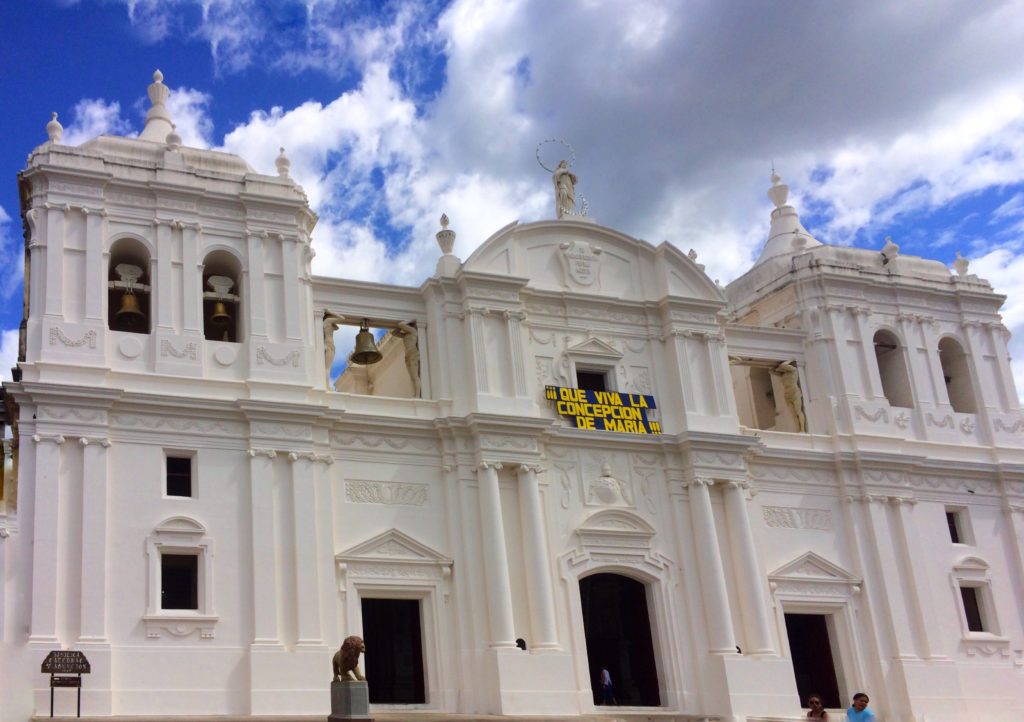 The tradition in Leon was almost similar to our practice of trick-or-treating where the home and business owners hand out goodies to the revelers. It is one of the more memorable ways that we were able to immerse in a local tradition.

These two holidays are celebrated around the world (or at least in every country we have traveled to). Celebrating these holidays away from friends and family make them different. We still gain a brief touch into another culture even if we don’t experience the sentimental value that those around us are experiencing.

It was really cool to stand among the crowds who come in from all directions to celebrate in Leon’s Central Park and dance with the gigantonas for Christmas. In Lima, Peru or favorite part of Christmas was the magic light show in the Circuito Magico del Agua. 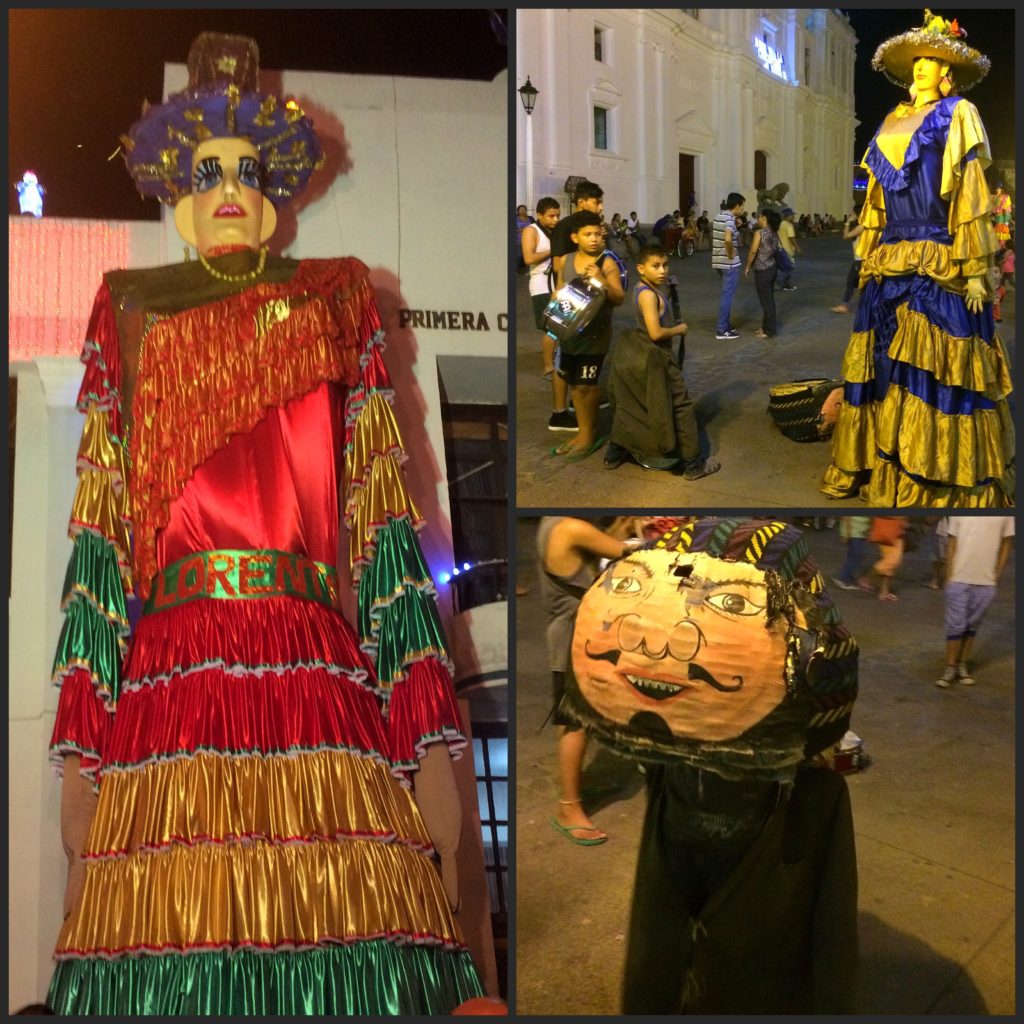 New Year is a blast, quite literally, in Nicaragua and Peru where we celebrated the last two. It seems that fireworks are synonymous with New Year’s Eve all over the world.

In Nicaragua, we had the pleasure of celebrating New Year’s Eve in Nicaragua with a local family. It wasn’t our family, but the family of a friend we came to know, love, and respect. We ran from the fireworks bull that night and drank a local concoction. We joined in the family festivities and laughter. It’s all about that human connection.

In Peru, we joined new friends from Australia at the Plaza de Armas in Arequipa while fireworks were shooting in all directions, over our heads, and through the crowd. We had to keep on our toes to dodge the little explosives all around us. Yes, my little American safety alarm bells were going off, but it was fun and wild all the same.

For the second Thanksgiving, we were in Cuenca, Ecuador. We looked for an expat gathering but quite frankly they were really expensive and it would have been with strangers anyway. We could eat at a local hole in the wall with strangers just the same for 1/10 the price.  The sentimental memories lay with friends, not the turkey.

This year we finally had the opportunity to cook a full-on American Turkey dinner. We are house sitting and have access to an oven, something we don’t often have access to while on the road.

Trin and I were in the grocery store earlier this week filling up a cart with food. I don’t think we have purchased this much food at one time since leaving the USA in 2016. We normally shop in open markets and carry all our food home in our Rachel Kendal tote bag.

I thought about doing the whole Thanksgiving dinner thing and remembered what I dreamed about for Thanksgiving when I was a kid.

I was probably seven years old sitting in a church pew while my parents were talking to another couple before the service began. The woman behind me leaned forward to talk to me.

“What are you having for Thanksgiving dinner this week?” she asked.

“Hot dogs!” I exclaimed. I loved hot dogs and my seven-year-old mind did not find anything strange about this at all.

After the service, the lady spoke to my mom on our way out and offered to buy us a turkey. She felt bad that we were only having hot dogs.

“We are having a turkey for Thanksgiving,” my mom said laughing, “Bonnie just likes hot dogs.”

So here I am many years later looking at all the items we would need for a big traditional meal. The thing is, we eat a lot of chicken. We rarely have pizza. Pizza is just not the same down here in South America. I saw the stuff to make pizza and told Trin that I’d like pizza for Thanksgiving. He grew up in the Philippines and doesn’t have the history with this holiday as I do. He is fine as long as there is food. I suppose I haven’t grown up much from the hot dog.

So pizza it is because it is all about giving thanks and remembering the good things that got us here. Here I sit thoroughly enjoying my Thanksgiving dinner remembering the good times thankful for all the people in our lives and so excited about seeing our friends in the US early next year. I am thankful for the opportunity to experience other countries and cultures and participate in their celebrations. I am really enjoying the pizza.

By the way, I kept the little bear with the purple cape. It is currently buried in a box in my parents’ basement. Some things just can’t be replaced.

What opportunities and memories are you thankful for?

8 thoughts on “Pizza for Thanksgiving & Other Holiday Traditions”