Thousands have died here on this narrow dirt road: people in buses, trucks, cars and even bicycles.

“You must be very careful. The first hour will be the most dangerous,” warned our guide.

Little did we know that within our small group, not everyone would reach the end quite exactly the same.

We were all decked out in rain gear, helmets, protective padding, and gloves. We were getting ready to cycle down death road.

THE WORLD’S MOST DANGEROUS ROAD

Yungas Road, aka Death Road, earned its reputation as the deadliest road in the world in 1995.  At that time, it was estimated that 200 to 300 people died each year on this road. Vehicles and bikes have careened off its edges, falling down vertical drops in places over 3,000 feet below.

Due to this death toll, the government built a new road on the other side of the valley that was finished in 2006.  The new road is paved, contains two lanes, and even has guard rails in many places.  Nowadays, the death toll on the original road is not nearly as high due to the reduced traffic, but it is still narrow with no guard rails and still claims lives. Just one slide on the mud would be all it takes. Then complicate the road condition and visibility with the fact that driving drunk is somewhat common in Bolivia, even for bus drivers.  We have had one drunk driver so far since we arrived in the country. 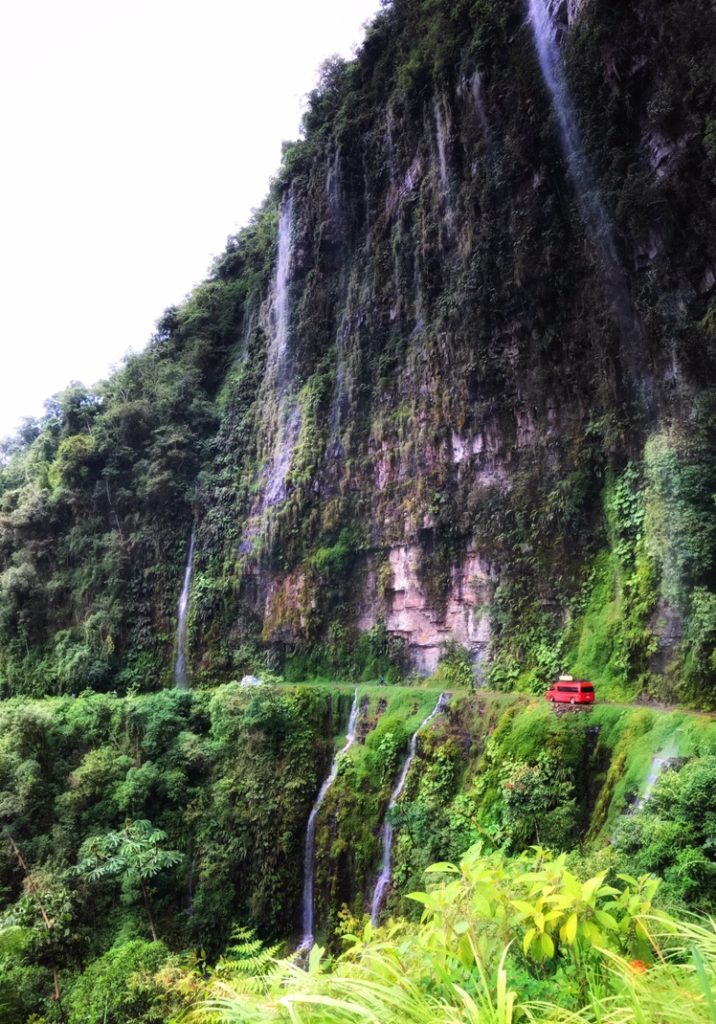 An average of at least one cyclist still dies each year.  There does not seem to be any statistics on automotive-related deaths since the new parallel road was built. There is still some vehicle traffic, but the majority of the people on this road nowadays are adventure cyclists.

Death road is shrouded in the clouds at the top where it sits at 15,260 feet (4,650 meters) above sea level.  Water freefalls from the sheer cliffs above onto the road making some sections muddy and slippery. The road continually descends to 3,900 feet (1,200 meters) in Yolosa where most tours end.  As the warmth of the lower elevation envelops the road, mud dries to dust and creates dust clouds that can make visibility just as bad as the fog did at the higher elevations.

TIRES ON THE EDGE

In Bolivia, as in most of Latin America, vehicles drive on the right side of the road.  The rules, however, are different on death road.  Signs warn all who pass to drive its 55 kilometer stretch on the left side. This gives drivers a better view of the cliff next to their outside tire.  It also requires the faster drivers going downhill to pull to the outside and stop so that passing can be done slowly and safely.  Most of the road is barely 3 meters wide and I found myself wondering on the way down where any vehicles could pass each other.

Indeed, on our way down, we found one driver that didn’t quite successfully navigate a pass.  Actually, we are not sure how this vehicle ended up in the ditch.

Our trek began at La Cumbre 15,400 feet (4,700 meters) above sea level where we would ride 22 km down a paved road. This section would help us get used to riding in full protective gear and tune in our rented bikes. It was cold but the rain gear helped keep the wind from penetrating my two fleece coats and Trin’s new microfiber jacket so we stayed mostly warm.  Trin also wore a pair of my leggings underneath his pants.  Don’t tell anyone.

We were in the clouds but the glimpse of the canyon was still spectacular. The cold rain began to pelt my face like stinging nettles and I hoped the sky would clear once we reached death road.

We stopped for a snack after 22km then hopped back in the van to head up to death road.

“Welcome to death road,” read the sign as we turned off the pavement to a narrow dirt road. I felt the energy within the group.  This was the road. Excited faces showed out of the small opening of full-face helmets. Xavier, our French whom we met at the hostel we were staying at, did a few dance steps to the reggaeton emanating from our van.  Xavier turned out to be a speed demon in this mountain.

“This is not a race, go slowly, take your time.” our guide reminded us. The road we were about to ride down would descend over 11,000 feet (3,350 meters) to the valley floor over the next 55 kilometers.

The road surface was wet dirt and gravel, but it beckoned us to follow its narrow winding path through the clouds. I glanced down the edge beside me and only saw a cliff that disappeared somewhere in the mist far below.

Only a few turns in and we met our first accident in the group. Paddy, a retired Canadian, flew off his bike when one of his brakes failed to engage.

Fortunately, he crashed on the mountain-side, and not the cliff-side of the road.

“I was very aware of that fact,” he later said during one of our pit stops.

He landed in a ditch that had cold water flowing through it.  One of the riders, Hutch from Austria, jumped off his bike and rushed to help him up. We were all already impressed with Paddy for undertaking this trek at the age of 74 and he continued to impress us as he stood up, brushed off some mud from his shirt, and got back on the bike.

As with the other speed demons in our group, he continued to fly down the road.  At the bottom of the trail, he bought Hutch, and his girlfriend Laura from Germany, a beer in thanks. We had a great group.

In a few sections, there was a curtain of water falling from above and we dashed through the downpours laughing at the fun of it.

The group stopped for a picture at the deadliest corner of the road. The narrow dirt path clings to the rounded cliff edge. Not a place to slide out. We pushed our bikes to the edge of the cliff, with smiles of excitement on our faces.

Were we flirting with death, or just thrilled by the adrenaline flow? Were we excited to be flying down a notorious road, or simply exhilarated by the stunning beauty around us? Maybe it was all of that in some odd mix.

With hardly any vehicular traffic, riding down death road was comfortable enough to be fun.  But make no mistake about it, if you push the bike far beyond your riding abilities, death road will live up to its name.  In fact, I’ve been on a few trails, one in Quilotoa Loop, and another in Otavalo that scared me more than this road, but they were both because we took wrong turns.

Our group met with yet another accident, this one a bit worse. Marcela, a Chilean student vacationing in Bolivia, wiped out and landed on her arm. I thought it was broken, but others thought it was just badly hurt.  No one had anything more than some ibuprofen. Xavier fashioned a sling out of a fanny pack as she winced in pain. They loaded her bike onto the van and she rode the rest of the way in the van. Unfortunately, she had to wait until we got back to La Paz to see a doctor. 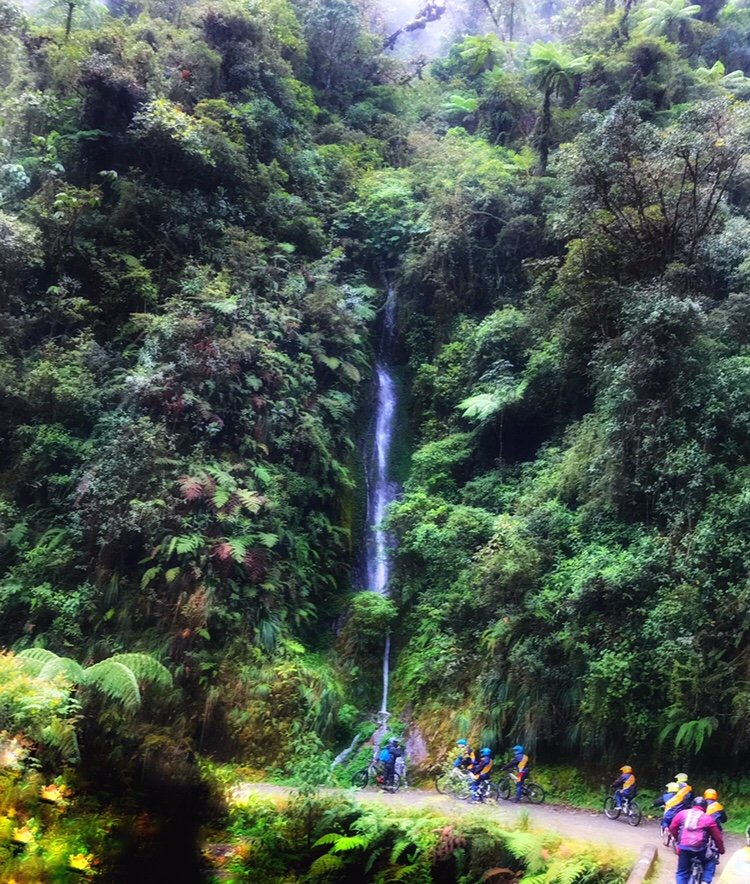 Soon, the elevation loss and the strength of the sun had us all sweating and we began to peel off layers of clothing. The mud that spattered up our backs earlier dried up and the road turned dusty.

While descending through the clouds, I was enraptured by the beauty of the canyon. Now, free of the restrictive layers, I once again reveled in the joy of flying downhill on a bike while feeling the breeze whistle by.

SPLASHING THROUGH WITH JOY

I slowed down for the next corner and big rocks ahead and then spotted the stream crossing on the road. I realized I did not have enough speed to make it through the deep water. As soon as I saw it, I began to pedal like mad. I hit the stream at a good clip.  Water flew out around me. I had gained just enough speed to make it to the other side of the stream. Laughter escaped my lips at the joy of splashing in puddles. 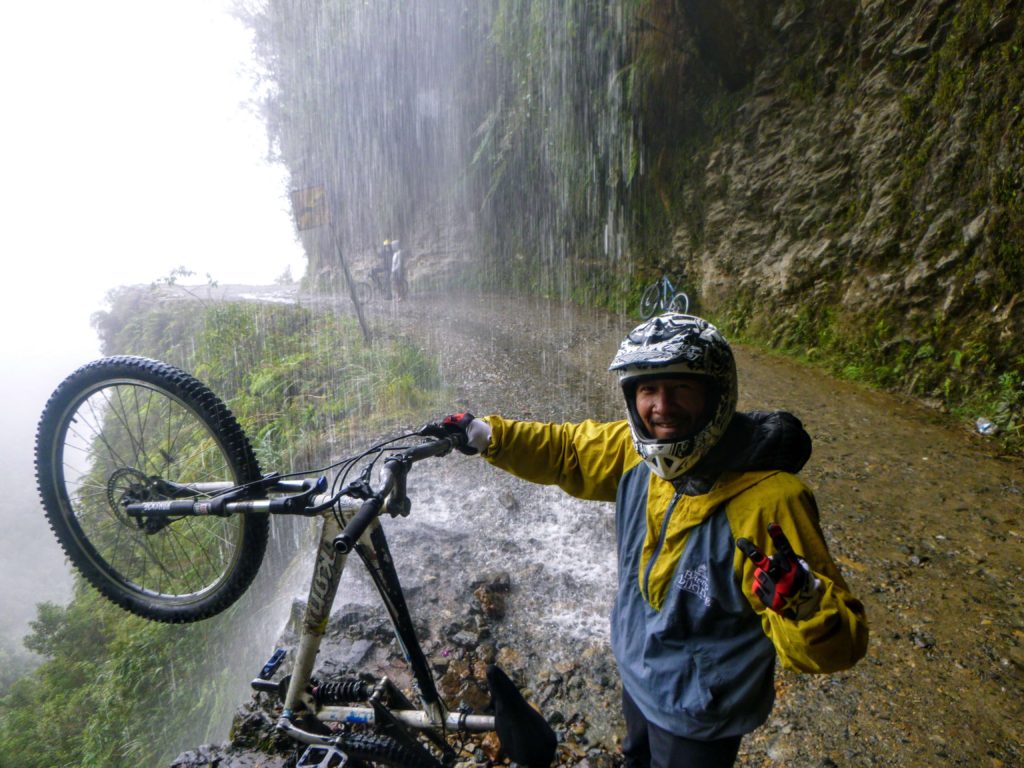 Immediately, I thought of my friend Susan, of one evening in college, after class.  It was raining and we were walking home.  She and I jumped in all the mud puddles, laughing like little children while mud splashed all over us. I thought of her, here on death road, as she is now riding her own path through cancer.  But even through it, her joyful, beautiful soul is shining.

On this road where so many have died, we had a glorious day reveling in its surrounding beauty. On every path of life, there is difficulty and there is sorrow. But there is also joy, just as Susan’s beauty is shining even brighter through her own difficult journey. 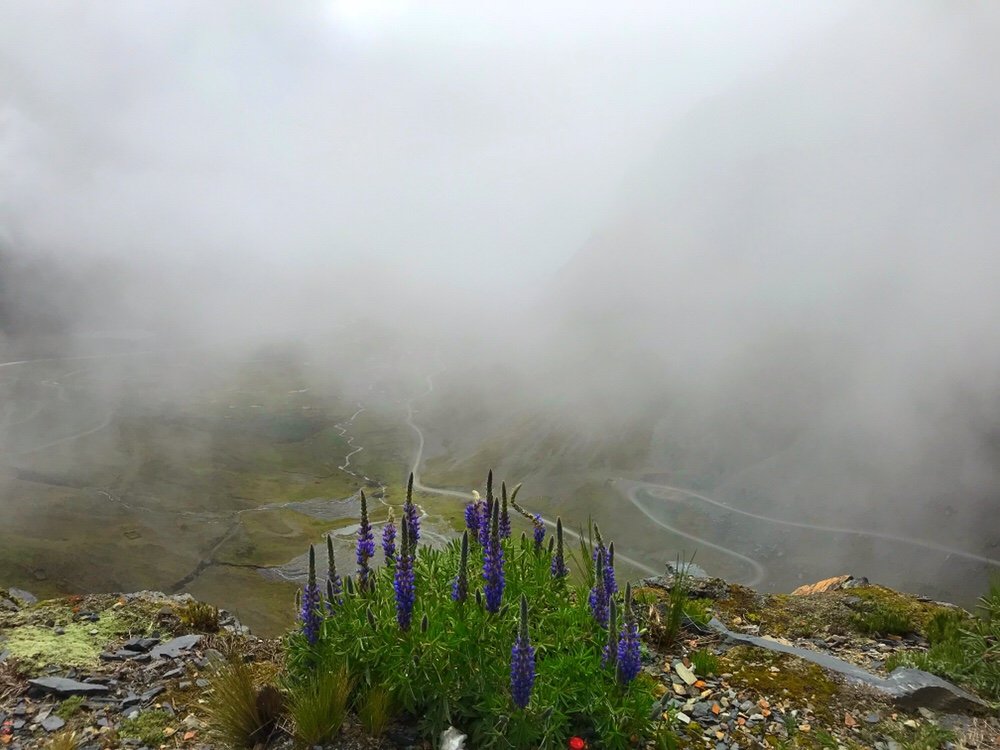 7 thoughts on “Flying Down Death Road, The World’s Most Dangerous Road”